The original king of bling 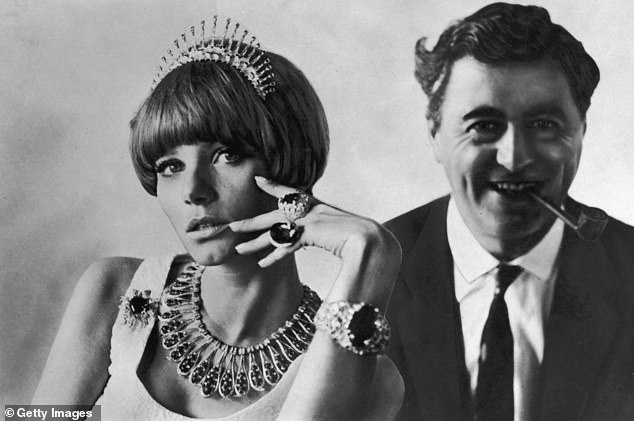 From a devastating family breakdown to war, jeweller Andrew Grima’s difficult beginnings didn’t stop him becoming the toast of 60s high society. But, discovers Claudia Joseph, his glittering career came at a price

It was 1966, the year that London became fashionable: Time magazine dubbed the capital the ‘Swinging City’, the Beatles were riding high in the charts, Mary Quant had revolutionised fashion with the miniskirt, and models and rock stars mingled with royalty.

So when photographer Lord Snowdon – then husband of Princess Margaret – was the guest of honour at a new jewellery shop in London’s Jermyn Street that October, it became an instant magnet for the beau monde. Its owner Andrew Grima, part of the Snowdon set, had just won the Duke of Edinburgh’s Prize for Elegant Design – the first and only jewellery to ever win it – and opened his eponymous shop. Designed by his architect brothers, Godfrey and George, and described as ‘a jewel of modern architecture’, it stood out among the street’s traditional stores with its steel latticework and slate exterior.

Customers flocked to its giant aluminium door, which swung open to reveal an exposed brick lair with futuristic showcases, modernist leather furniture and a Perspex spiral staircase. Signatures in the visitors’ book – alongside Elizabeth R, Lord Snowdon, Princess Margaret and Princess Anne – included Bond girl Ursula Andress, actor and comedian Peter Sellers and singer Lulu, who’d just had her first hit, ‘Shout’, at the age of 15. The shop even featured in the iconic 1970s police drama The Sweeney. 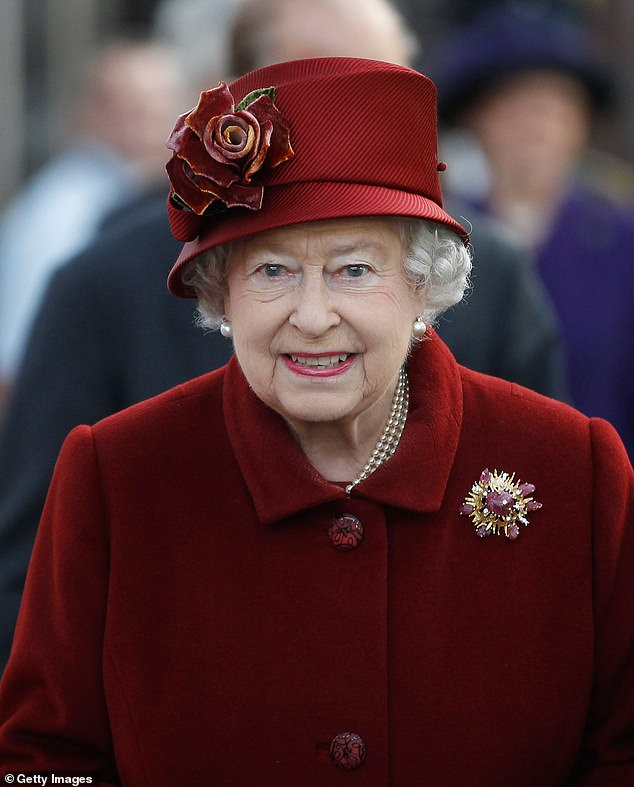 The Queen wearing Grima’s Ruby Venus brooch. It was a present from Prince Philip

‘I think my father would like to be remembered as changing the face of jewellery design,’ Grima’s daughter Francesca tells me today. ‘He was the epitome of a British gentleman, which is funny because you would think that someone who designed jewellery would be quite eccentric. He was always incredibly generous with his time. Most of his clients became friends and he loved entertaining. He was a great friend of the Roux brothers [acclaimed chefs Albert and Michel].’

Now a new book by Francesca’s stepfather William Grant – who is married to Grima’s former wife Jojo – describes how Grima, the son of two immigrants, earned his place in the royal upper circle and became the ‘father of modern jewellery’. Born in Rome in 1921, into an affluent Maltese-Italian family, Grima – the eldest of nine children of a lace maker – emigrated to Britain with his family at the age of five. An artistic child, his teenage years were overshadowed by the rise of Mussolini: when Italy invaded Abyssinia in 1935, trade sanctions ensued, causing the collapse of the business owned by Grima’s father, who was then hospitalised after a nervous breakdown.

Grima, aged 16 at the time, had to leave school and become head of the family, landing a job as a technical draughtsman. After serving in the British Army in Burma, he was demobbed at the war’s end, only to discover that all art colleges were closed. Instead, he took an evening secretarial course – the only man in a class of 40 – and met his first wife Helène Haller. After joining her family’s jewellery firm, HJ Company, Grima’s Damascene moment came in 1948 when two dealers arrived ‘with a suitcase of large Brazilian stones –aquamarines, citrines, tourmalines and rough amethysts in quantities I had never seen before’. Grima persuaded Helène’s uncle to buy the cache and he designed his first collection.

When Lord Snowdon made a speech at a British Jewellers’ Association luncheon in 1963, which was reported by the Daily Mail under the headline ‘Madame Your Jewellery is Too Timid’, Grima was incensed.

‘Lord Snowdon criticised modern British jewellery yesterday,’ the article stated. ‘He complained that most designs were “unadventurous”, declaring, “for the most part we have clung to the traditional in a way that a skater clings to the edge of an ice rink”.’ 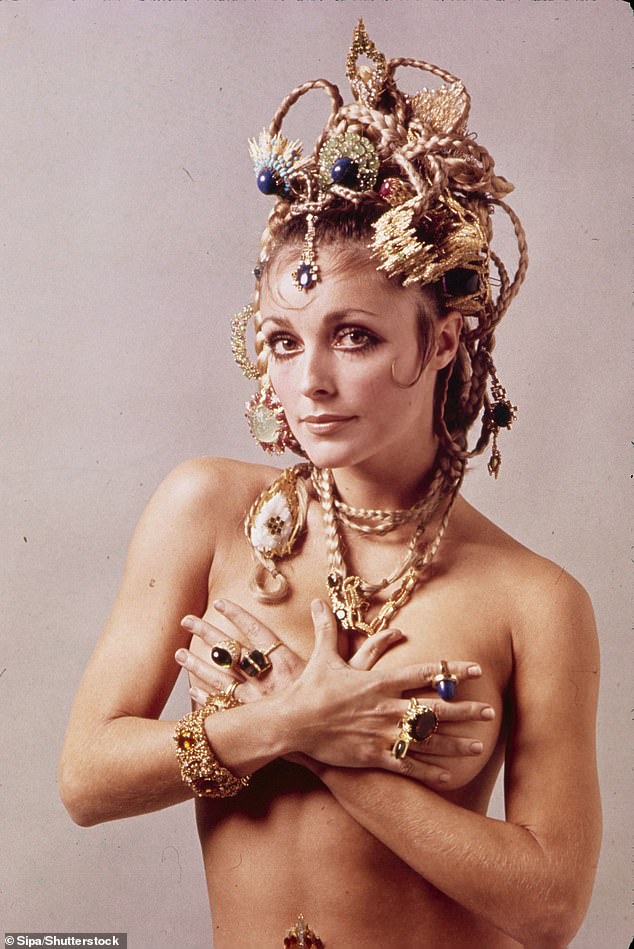 Putting on the glitz (and not much else): actress Sharon Tate wearing Grima’s baubles in the mid 60s

Stung by the criticism, Grima wrote to Snowdon inviting him to tour his workshop. Their meeting, in November 1964, began a lifelong relationship. ‘They had a great friendship,’ says Francesca. ‘Lord Snowdon even photographed my mother.’

Meanwhile, Grima’s daring designs and use of large colourful gemstones and exotic minerals began to attract attention. He went on to win 11 De Beers Diamonds International Awards – the Oscars of the jewellery industry – a number unsurpassed by any other jeweller before or since.

In November 1965, Grima, who often sketched ideas on the back of menus, achieved his first Vogue cover – photographer David Bailey snapped his ex-girlfriend Jean Shrimpton in an enormous aquamarine ring. The following year he won the Duke of Edinburgh’s Prize for Elegant Design and the jewels were modelled by actress Ursula Andress, who was riding high on the success of playing Honey Ryder in Dr No.

Royal patronage was to follow: in 1967, having been introduced by her husband, Princess Margaret sent Grima a package containing a handwritten letter and a piece of lichen she had found on a walk at Balmoral, asking if he could cast it in gold. ‘Forgive a letter out of the blue,’ she wrote. ‘I have so often admired your work and in fact am the proud possessor of one of your brooches. If it were possible perhaps you would let me know the cost, for alas I would have to admit defeat if it were very expensive to do and be content with nature’s efforts.’ 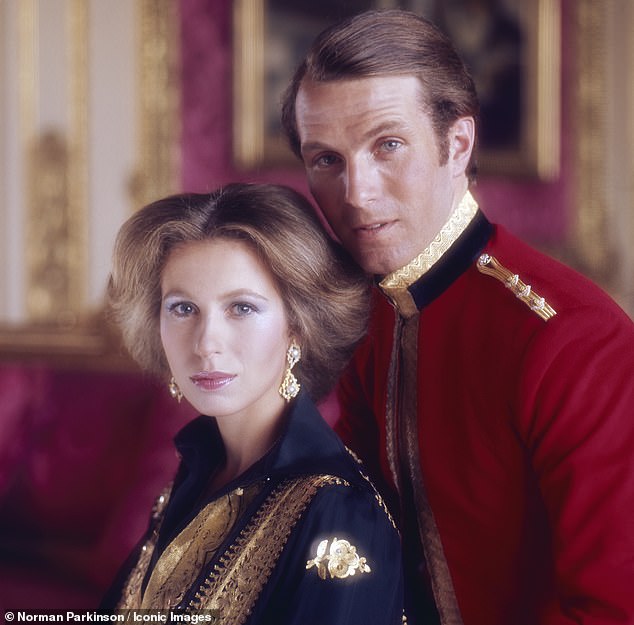 Fit for a princess: Anne in Grima chandeliers, with captain Mark Phillips, 1973

Ever courteous, Grima replied: ‘It is obvious that you have a flair for design because the lichen is one of the most perfect natural forms and asks to be reproduced in gold. I hope that you will permit me to make the jewel for a token sum of £1. In this way, I will be able to record it as a sale.’

It was Prince Philip who led to patronage from the Queen. He had bought his wife a piece from Grima’s prize-winning collection, now known as the Ruby Venus brooch, which was a favourite of hers.

In 1968 Grima was summoned to Buckingham Palace, where he was invited to submit some designs suitable for the hosts of overseas state visits. He presented drawings of brooches and cufflinks, incorporating the royal cypher, to the Queen. ‘That was a memorable moment in his career,’ recalls Francesca. ‘He drove to Buckingham Palace in his Aston Martin to meet her for the first time. He was very humbled and very honoured. He loved the Queen, loved the Royals, but he never forgot his roots.’

The following month Grima was invited to lunch at the palace, where he was seated between financier Lord Rothschild and Princess Anne. ‘He recalled the Princess telling him to be careful when cutting into the suprème de volaille à la Kiev (chicken Kiev, as it is now known),’ Grant writes in his book.

‘With the matter broached and circumnavigated, Grima turned his attention to the vegetables… Debrett’s Guide to Etiquette and Modern Manners fails to give adequate advice on the correct form to follow when a person stabs a potato, causing it to fly off the table and under the monarch’s feet. The simplest solution was for one of the corgis to take matters in hand but, alas, they appeared reluctant to intervene. Eventually, an attendant wearing silk breeches and gold trimmings approached and, with as much dignity as he could muster, crawled under the table to brush the offending item into a silver crumbler.’

Despite the potato incident, the Queen continued to commission Grima and, in 1970, he was awarded the Royal Warrant. In 1972, he was invited to create a brooch for the wife of the French president, Georges Pompidou.

‘The Queen explained that she wanted to take a piece for Madame Pompidou but was worried that the royal insignia was unsubtle,’ adds Francesca. ‘So my father came up with the idea of placing it behind the stone so that it would be more subtle. It was very well received at the Elysée Palace when Madame Pompidou immediately put it on her jacket.’ 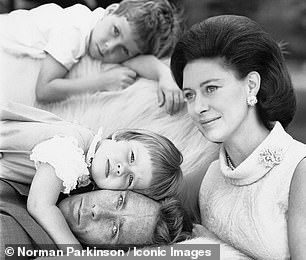 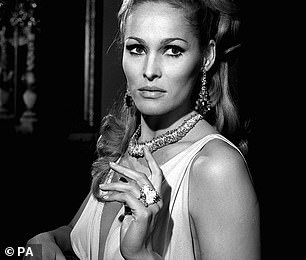 Grima also designed jewellery for Princess Anne – he recalled her driving him in her Mini from Jermyn Street to the workshop in Shaftesbury Avenue as ‘a bit of a white-knuckle ride’ – as well as Princess Diana, who was presented with one of his brooches during a royal visit to Wales in 1985.

But the Princess of Wales was to be his last royal customer. By then Grima had separated from his first wife, who ‘hated all the glitz’ and – after a costly divorce – married his second wife Jojo, great-granddaughter of diamond magnate Sir Thomas Cullinan. In a bid to recoup money, Grima had taken on a new business partner whose financial problems meant Grima lost his shop. He left Britain a broken man, having written to the Lord Chamberlain returning the Royal Warrant.

‘I could never have let her name be associated with the owner’s dealings,’ he said afterwards. ‘It broke my heart, but what else could I do?’

‘My father was an incredibly resilient,’ says Francesca. ‘Although he almost had a nervous breakdown when that happened, he decided to move to Switzerland and build a new life.’ Grima died in 2007, aged 86, after suffering from dementia. His memory lives on in his jewellery. To mark her 70th wedding anniversary in 2017, the Queen wore her beloved Ruby Venus brooch.

Susannah Taylor: How fit are your feet?

Heatwave conditions sweep much of the country

Calls for Rule, Britannia! to be banned from Last Night of the Proms