A motorcylist has filmed the crazy moment his riding mate lost control of his bike, crashing and skidding along the tarmac while wearing only a T-shirt.

The video released on the Holdfast Motorcycle Club Youtube channel shows the biker filming his speedometer as his machine accelerates towards 200km/h along the Old Coast Road in Dawesville, Western Australia.

As the footage shows, his bike reaches 199km/h before his mate looms up in the right-hand lane and passes him at higher speed. 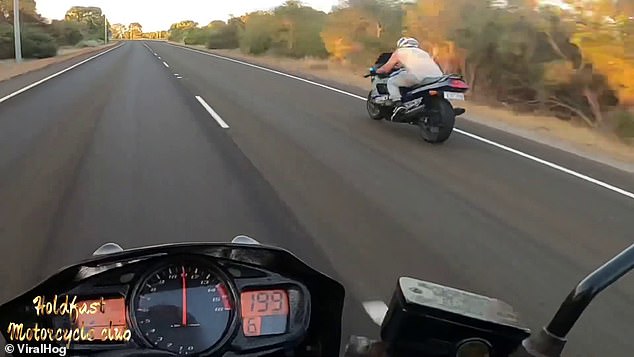 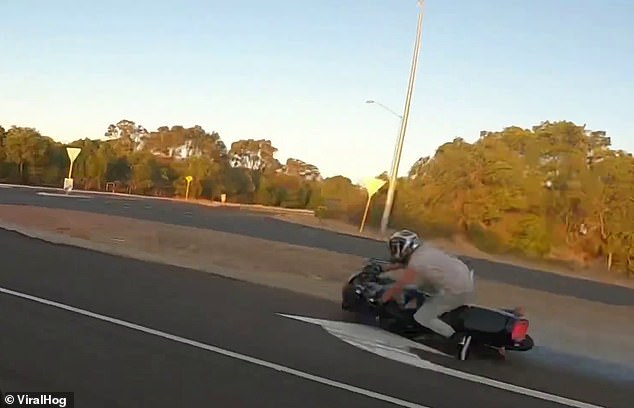 The other motorcyclist then brakes suddenly and comes off the bike to his left, skidding along the highway on his arm and shoulder.

The camera swings around to show the bike flipping down the median strip as parts of it fly off and the rider lies motionless on the ground.

The cameraman can then be heard descending through the gears as he slows down, turns around and returns to check on the fallen rider.

Drivers stop in the middle of the road and race to check on the crashed rider’s welfare, finding him cradling his arm. Large grazes can be seen through the rider’s shredded T-shirt and he appears in shock as he stares at a large cut on his left hand. 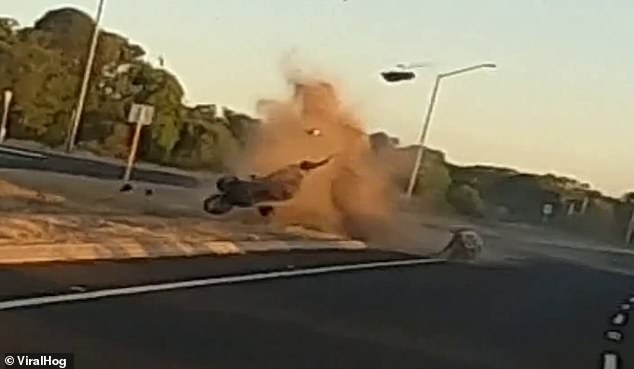 A comment on the video by the person who posted it confirmed that the rider had sustained a number of serious injuries, including a broken collarbone, three broken ribs, a punctured lung and and extensive ‘road rash’.

‘Rider is on a good recovery and is healing well… claims will be back in a bike soon!’ added the poster.

Many people who viewed the video posted comments underneath expressing amazement at the rider’s lack of protective gear.

‘If he’d been wearing some semi-decent riding gear he’d have most likely just ended up with some bruises at worst,’ wrote MotoGoat. ‘This is why ya shouldn’t ride high speeds in jeans and a t-shirt. It’s basic commonsense.’

‘At least he was wearing a helmet,’ said Opa Red. ‘Notice the scratches on it? That could have been his head.’ 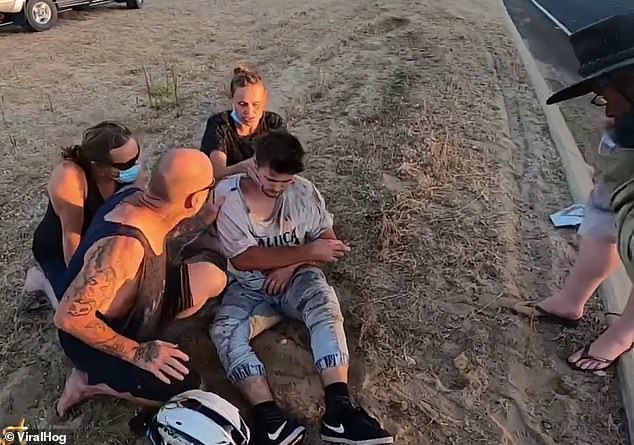 Nearby drivers rushed to the aid of the injured motorcylist, who appeared to be in shock

The Dawesville area had been the scene of a number of incidents involving motorcyclists in recent years.

In July 2015 a 41-year-old bike rider died when he collided with a kangaroo on the same stretch of road at Dawesville.

In March 2019, a motorcylist allegedly involved in a police pursuit was killed on the Old Coast Road closer to Halls Head.

Locals told the Mandurah Coastal Times in September 2020 that it was only a matter of time before someone was killed by hooning in Dawesville.

Residents asked police for patrols and cameras throughout the suburb to ensure the safety of residents.