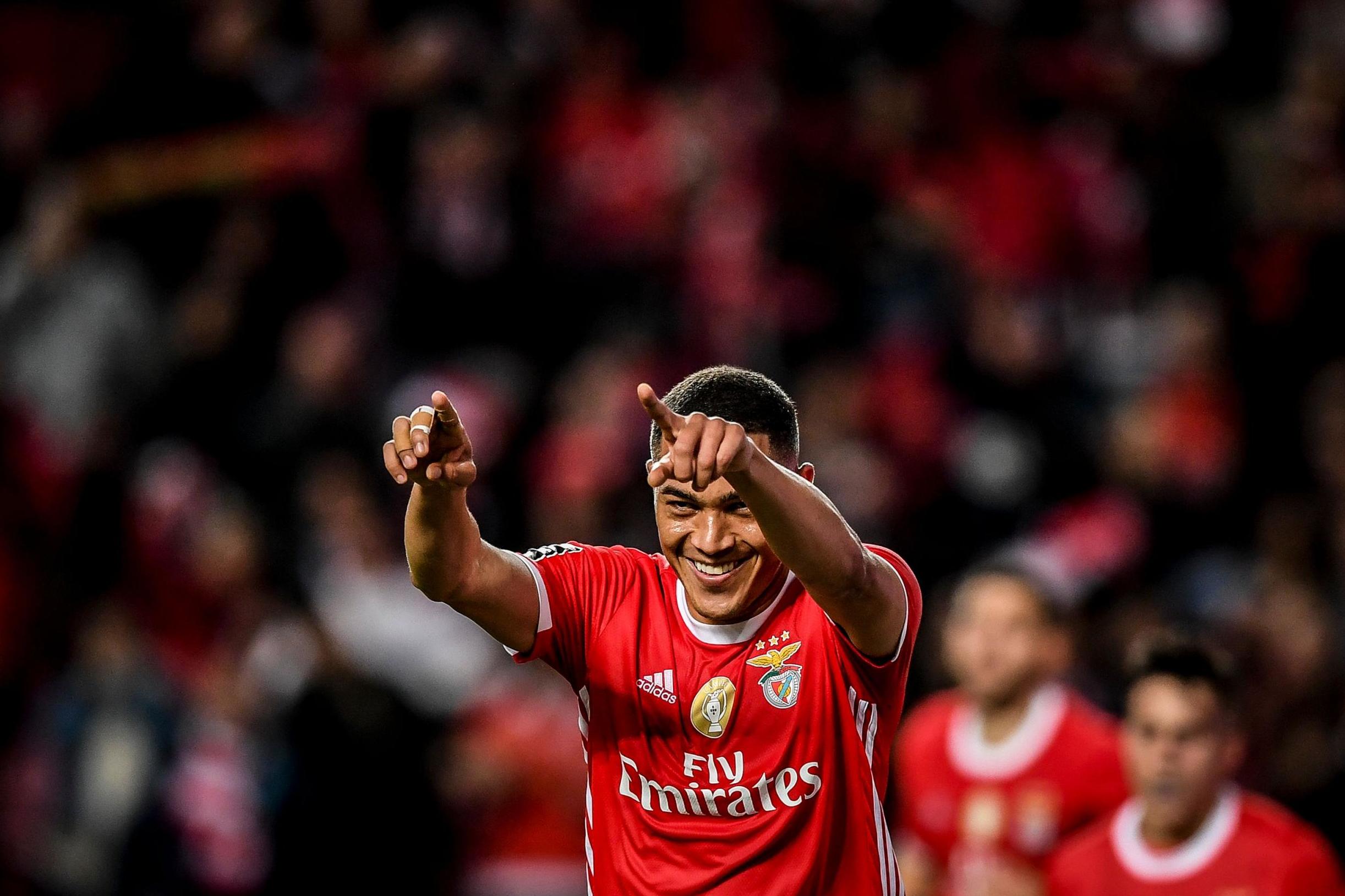 Welcome to the Evening Standard’s live coverage of the latest news and rumours from the transfer window.

Time is running out for Premier League sides to make changes to their squad for the 2020-21 season. Clubs have until October 5 to sign players from Europe, though deals with EFL clubs can continue until October 11.

So far, Chelsea have put the rest to shame with eight new additions while Tottenham have made a statement of intent of their own in re-signing Gareth Bale – with Sergio Reguilon also arriving from Real Madrid – and have agreed to sign striker Carlos Vinicius from Benfica on an initial loan deal.

Champions Liverpool have bolstered in the form of Thiago Alcantara and Diogo Jota – but it remains quiet for Manchester United as their pursuit of Jadon Sancho was put under added pressure following a tough Champions League group-stage draw.

Arsenal have also been busy, and are targeting Lyon captain Houssem Aouar and Thomas Partey in what could be a dramatic finish to the transfer window.

Barcelona head coach Ronald Koeman was tight-lipped on Ousmane Dembele’s future being left out of their 3-0 win over Celta Vigo.

The French winger has been strongly linked with a loan move to Manchester United after the Red Devils grew frustrated in their attempts to sign Jadon Sancho.

The 23-year-old was not used by Koeman for the game, instead sending on Francisco Trincao and 17-year-old Pedri as substitutes, and the Barca coach refused to give anything away on Dembele.

“Pedri and Trincao add more defensively, for that reason I went with them,” he replied when asked about his absence.

Liverpool boss Jurgen Klopp has dropped the strongest hint yet that Xherdan Shaqiri is set to leave the club.

The Switzerland international was expected to be included in the Reds’ line-up for the Carabao Cup penalty shootout defeat to Arsenal but the 28-year-old was nowhere to be seen.

After the game, Klopp did not mention Shaqiri by name but appeared to suggest there had been some movement on Shaqiri’s exit, with two unnamed clubs interested, according to The Liverpool Echo.

“Some were not involved,” Klopp told Sky Sports.

“It is the time of the year when some things happen in the background and you have to react – that is what we did.”

Inter Milan will revive their attempts to sign Marcos Alonso if Chelsea allow him to leave on loan, according to reports in Italy.

The Spaniard reportedly infuriated Frank Lampard after watching the second half of the Blues’ game against West Brom on the team bus and the 29-year-old is expected to depart.

Inter boss Antonio Conte was thought to be interested in reuniting with Alonso at the San Siro in January but signed Cristiano Biraghi instead.

However, Italian transfer expert Fabrizio Romano says a deal could be back on if Chelsea make Alonso available for loan.

L’Equipe reports that the French champions have sought negotiations with Lyon for the 22-year-old midfielder.

Benfica have confirmed that striker Carlos Vinicius has agreed a season-long loan to join Tottenham.

The Portuguese side made an official announcement late Thursday evening.

As reported by Standard Sport earlier in the day, Spurs will pay a €3million loan fee with the option of making the move permanent at the end of the seasons.

An official statement from Benfica read: “Sport Lisboa e Benfica – Futebol, SAD informed the Securities Market Commission (CMVM) that it reached an agreement with Tottenham Hotspur for the loan of player Carlos Vinicius until the end of the 2020-21 sports season for an amount of 3 millions of euros.

“The said agreement, communicated at 11:56 pm on Thursday, includes a purchase option clause in the amount of 45 million euros, to which, if exercised, the amount paid for the loan will be deducted.

“The agreement is dependent on the signing of the striker’s sports work contract with Tottenham Hotspur.”

“We know that we need someone,” he told Premier Sports.

“For a long time the club structure have been looking to find us a good option, but I haven’t been told that anything’s confirmed, so I can’t say anything.”

Tottenham are currently sailing through to the Europa League group stages as they lead Maccabi Haifa 4-1 at half-time of their play-off tie.

And good news also appears to be looming on the transfer front, with The Mail reporting that Spurs have now been granted the work permit that will allow them to complete their loan swoop for Benfica’s Brazilian frontman Carlos Vinicius.

Said Benrahma returned to Brentford’s starting XI for the first time this season and provided a timely reminder of his quality to any interested parties.

The Algerian scored from close range to double the Bees’ lead against west London rivals Fulham in a Carabao Cup fourth-round clash that doubled up as a rematch of last season’s Championship play-off final.

Benrahma’s second goal was a moment of true class as he back-heeled through the legs of Michael Hector in fine style before bending a shot into the bottom corner.

Many are surprised that the 25-year-old is still at Brentford after last year’s heroics and with the transfer deadline edging ever closer.

Will tonight’s display convince his suitors that they should be making a move?

If anything was going to get United moving in the transfer market, it would be a tough Champions League draw – and they’ve certainly got one.

The Red Devils are in Group H, where they will take on last season’s runners-up PSG as well as RB Leipzig and Istanbul Basaksehir – ouch.

That may well force United to get their act together regarding signings, but the problem is that having left it this late, other clubs know United will want to get players in before that tough European schedule…

Italian transfer specialist Fabrizio Romano has an update on Fulham’s well-documented pursuit of a new centre-back – the difficulties associated with which Tony Khan laid bare on Twitter earlier this week.

Romano now says that Fulham are having no luck with regards to Jean Clair Todibo, with Barcelona said to be unwilling to accept their loan offer for the 20-year-old.

However, negotiations are reported to be continuing with Sampdoria over Gambian defender Omar Colley. Could he be the solution to Scott Parker’s backline woes?

A done deal at The Valley, where Charlton have completed the signing of Marcus Maddison.

The versatile forward has joined as a free agent following his release by League One rivals Peterborough and penned a one-year contract that includes the option for a further 12 months.

“I’m delighted, this has been going on for quite a while,” Maddison told Charlton’s official website. “There was interest in January so I’m pleased it’s been done.

“To have consistent admiration from the manager and for him to pursue me all these months down the line shows that he believes in me as a player and that’s a massive deal for me.

“It’s a fresh start for me. The amount of time I’ve had out makes you remember why you started playing football in the first place, so I’m looking forward to getting started.”

Watford boss Vladimir Ivic admits he is still unsure if Troy Deeney will be at the club when the transfer window closes, writes Simon Collings.

Deeney has been at Watford for 10 years, but has been linked with a move this summer after the Hornets were relegated to the Championship.

The striker has been attracting interest from West Brom, while he has also been linked with Tottenham.

Deeney was in Watford’s squad for the first time last weekend after recovering from a knee injury and came off the bench for the final stages as they beat rivals Luton 1-0.

Ivic, however, is unsure if Deeney will be at the club when the domestic transfer window shuts on October 16.

“I said that we don’t know until the last minute of this transfer window what is going to happen,” said Ivic.

“I speak with people from the club, with the board of the club, who work on this transfer window on who will move, who will come.

“We will see until the last moment what is going to happen. I cannot tell you something more in this moment because I do not know.”

No Man Utd offer for Cavani

Manchester United have not made an offer to free-agent Edinson Cavani, according to Goal.

The Uruguayan is still without a club after leaving Paris Saint-Germain when his contract expired last season.

The forward has been linked with a move to United, but those reports are reportedly off the mark.

Goal claim Atletico Madrid do have “terms on the table”, but insist Diego Costa will have to leave before a deal can be made.

Roma closing in on Smalling deal

Roma are nearing a deal for Manchester United centre-back Chris Smalling, according to The Athletic.

Smalling impressed during a season-long loan deal with Roma last season, with the Italian club desperate for him to return.

According to the report, Roma have now offered closer to United’s £20million asking price.

The report claims that United were ready to open talks with Juve as they sought alternatives to Jadon Sancho, but that the Brazilian is desperate to start at Juventus and fight for his place under new boss Andrea Pirlo.

Former Manchester United man Luke Chadwick believes the club must sign Jadon Sancho AND two new defenders before the window closes if they are to compete for the title.

“For the club to really compete, they need more than one signing. It will take two, three, four signings to really compete,” he told Sports Mole. “Jadon Sancho would be a huge signing. They’ve got gifted players in that position already but Sancho is a talent that doesn’t come around too often.

“The defensive issues are a problem. They need reinforcements in the back-four. The left-back position has been spoken about a lot.

“Alex Telles looks a fantastic player. I think Luke Shaw is great but it’s whether he can stay fit for the whole season.

“So I think a couple of defenders are a must and Sancho if the club want to compete for the title.”

Manchester United are working on a deal to sign Atalanta winger Amad Traore, according to the Manchester Evening News.

The report claims there is ‘cautious optimism’ a deal can be done before Monday’s transfer deadline.

The Ivorian however is not said to be seen as an alternative to Jadon Sancho, with United still hoping to sign the Borussia Dortmund to solve their long-standing issues at right wing.

Barcelona have completed the signing of full-back Serginho Dest from Ajax.

Wilder ‘would love to re-sign Brooks’

Sheffield United boss Chris Wilder says he would love to bring Welsh midfielder David Brooks back to the club.

Brooks left the Blades to join Bournemouth two years ago, but the two clubs’ fortunes have contrasted since then, with the Cherries relegated to the Championship while United first achieved promotion and then secured a top-half finish in the Premier League.

“I’d love, and maybe I’m out of order for saying this but I mean it with the utmost respect, to bring David Brooks back to this football club,” Wilder said. “If he was available that is. Maybe I’m wrong for talking about him. But he’s a match winner.”

West Ham are confident they can strike a loan deal with Chelsea for midfielder Ruben Loftus-Cheek, according to the Daily Star.

Frank Lampard has confirmed Loftus-Cheek is available for loan, though Ross Barkley has now also left for Aston Villa.

The Hammers believe a deal of the midfielder can go through independent of the future of Declan Rice, which they remain adamant is at the London Stadium.

When does the 2020 summer transfer window close?

Trump aide has likely been contagious with coronavirus for at least 3 days, health expert warns

You can understand your tenderloin! This collar translates your dog’s barking using artificial intelligence