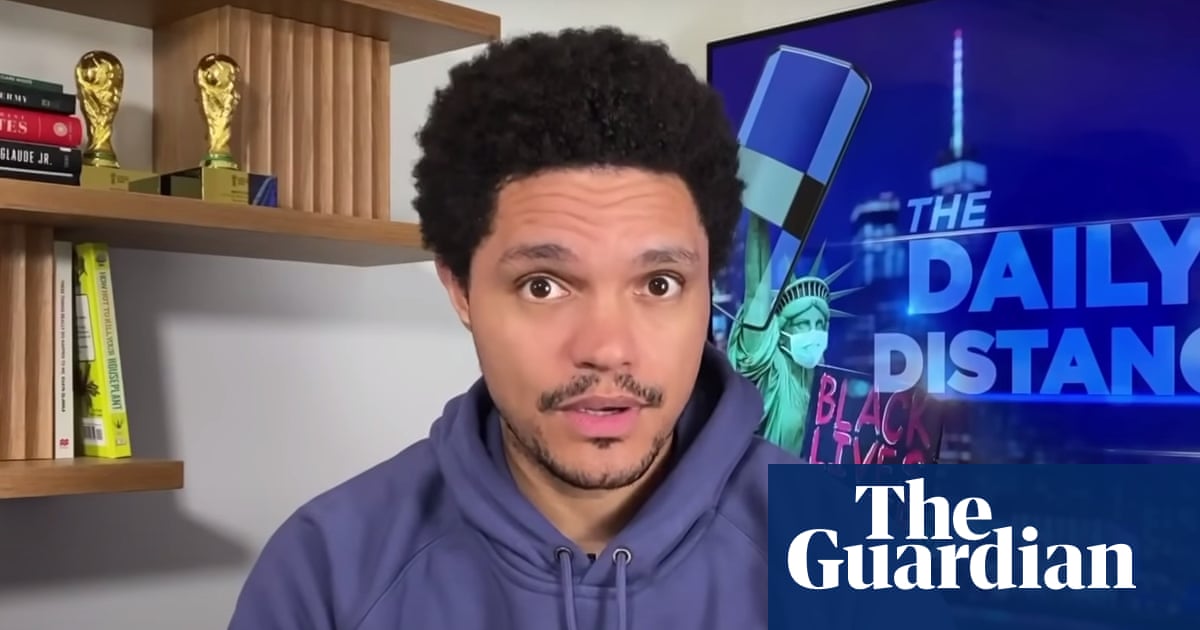 “Now you may remember back in February and March, Donald Trump was very confidently saying that the coronavirus was not a big deal, and it was basically just like the flu,” said Trevor Noah on Wednesday’s Daily Show. “Since then, we’ve all learned that that was bullshit.” And on Wednesday, a new book by Washington Post associate editor Bob Woodward revealed that behind closed doors, the president also knew the same.

In an audio interview for Woodward’s book, Rage, on 7 February Trump said the coronavirus was “more deadly than your, you know, even your strenuous flus”.

“I wanted to always play it down. I still like playing it down, because I don’t want to create a panic,” Trump said in a recording from 19 March.

“Since when is Donald J Trump concerned about creating a panic?” Noah retorted. “That’s literally his favorite thing – ‘Cities are burning, suburbs are collapsing, caravans of antifa Mexicans are committing Muslim voter fraud.’”

Woodward’s interviews confirm that as early as February, Trump knew both that the virus was airborne and more deadly than the seasonal flu, yet continued for months to tell Americans that there was nothing to worry about. “I thought Trump was too stupid to understand what was going on with the virus,” said Noah of the revelations, “but it turns out that he was actually smart about it in private. But he’s also stupid enough to tell Bob Woodward on tape.”

Woodward’s 18 interviews with Trump from December 2019 through July 2020 covered more than just the pandemic; asked on 22 June if he believed systemic racism is a problem in America, Trump responded: “I think it is, and it’s unfortunate, but I think it is,” despite numerous rallies in which he pretended racism wasn’t an issue during his presidency.

“This whole time, I thought there were gonna be secret tapes of Trump saying the N-word,” said Noah. “Instead, we got tapes of him being an epidemiologist with a PhD in critical race theory.”

And if you’re thinking evidence of private awareness is good news, said Noah, think again. “This is terrible news, because you know what it shows? It shows you that Donald Trump is willfully misleading the public. It reminds you that he’s a con man.” He’s lied about coronavirus to protect the economy and his re-election, Noah added, and ignored systemic racism to protect his image with his base.

“Things are so bad that even Trump seems aware on some level that we’ve careened way over the precipice and plunged down into the abyss,” said Seth Meyers on Wednesday’s Late Night. During a rally in Winston-Salem, North Carolina, on Tuesday, Trump appeared to acknowledge as much, in his nonsensical way. “In the middle of a rant about god knows what – honestly, I couldn’t explain it and it’s not worth trying,” Meyers said, the president urged the crowd: “If you come back in a thousand years, 2,000 years or 3,000 years, if you’re lucky enough – assuming we have something, the world is a crazy place, isn’t it?”

“What? Is it slam poetry night in the head injury ward?” Meyers responded. “We know the world is crazy. Did you just wake up from your KFC coma?”

At another point during the North Carolina rally, Trump touted, without evidence, a dubious coronavirus vaccine that would be ready just in time for the November election.

“Oh, October! How convenient,” Meyers deadpanned. “Look, we all desperately want a vaccine as soon as humanly possible,” he added. “But we want it to be safe and effective so enough people can get it and we can put this nightmare behind us. Unfortunately, the way Trump is going, he’s going to start handing out vials of Diet Coke at his rallies labeled ‘vaccine’.”

On Full Frontal, Samantha Bee also discussed the race for a coronavirus vaccine, which experts have could be ready by the end of the year at the earliest. The Trump administration, however, has claimed without evidence that states should prepare for widespread distribution of vaccine on 1 November, two days before the presidential election. “And if that sounds like politicizing the vaccine, it’s because he is,” said Bee.

“It’s obvious why we should be relying on health experts here, not the president, and not just because he considers potato buns to be a vegetable,” Bee said. “Even the pharmaceutical companies agree we need data.” Such pharmaceutical giants as Moderna, Pfizer and Johnson & Johnson have said they will refrain from submitting vaccines for federal approval until there is sufficient data to prove the shots are safe.

“It’s crazy that we’re living in a world where we’re relying on drug companies to be the good guys,” said Bee. “Trump sees the vaccine as a silver bullet for his re-election. But a vaccine shouldn’t be tied to what happens in November.

“To end this pandemic,” she concluded, “we have to put our faith in public health officials.”

‘Skinny house’ that measures just THREE FEET on one side sells for $260,000 in Illinois

Company behind vaccine overdoses having ‘book thrown at them’