A new poll shows that with Election Day rapidly approaching, President Trump is beginning to close the gap on Joe Biden‘s lead.

According to a Fox News national survey of likely voters released Friday, Biden’s lead over Trump has narrowed from a 10-point advantage to eight points.

The poll indicates that Biden is now ahead of Trump by a 52-44 per cent margin, with two per cent of likely voters backing a third-party candidate and two per cent being undecided. 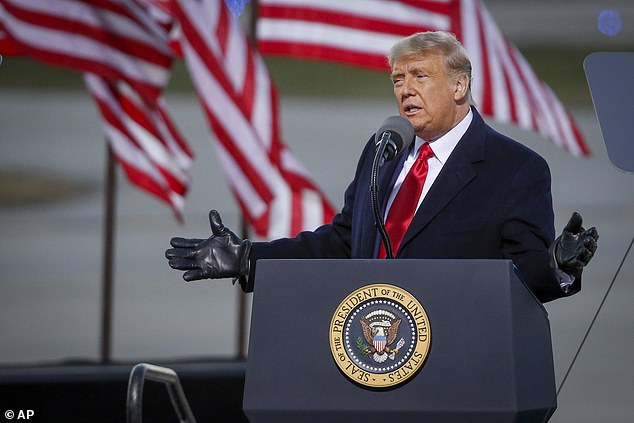 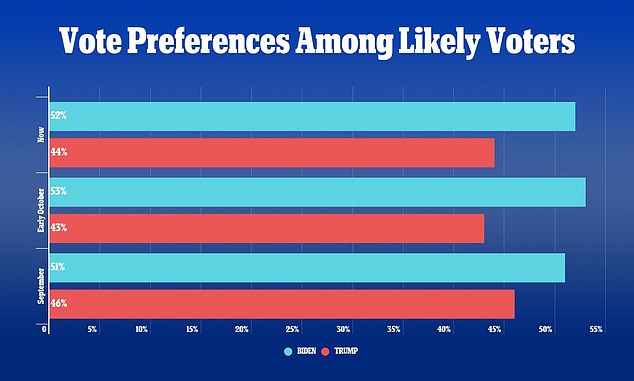 The new poll showed that Biden’s lead had dropped from 10 points to eight points in the last three weeks. He is now leading by 52-44 per cent, but he previously lead by 53-43 per cent

Three weeks ago, in early October, the pollster said that Biden had a 53-43 per cent margin.

Fox News reported that among likely voters, support for Biden has been between 51-53 per cent since early September, a notable difference from 2016’s presidential race, when neither Trump nor Hillary Clinton exceeded 48 per cent in either the pre-election surveys or the final election results.

‘Biden is holding a substantial lead nationally, many votes are already cast, and there are few undecideds,’ Democratic pollster Chris Anderson, who carried out the survey with Republican Daron Shaw, told Fox News.

‘It’s hard to see the national race shifting significantly in the closing days, but that doesn’t mean it’s impossible for Trump to again thread the needle on an Electoral College victory.’ 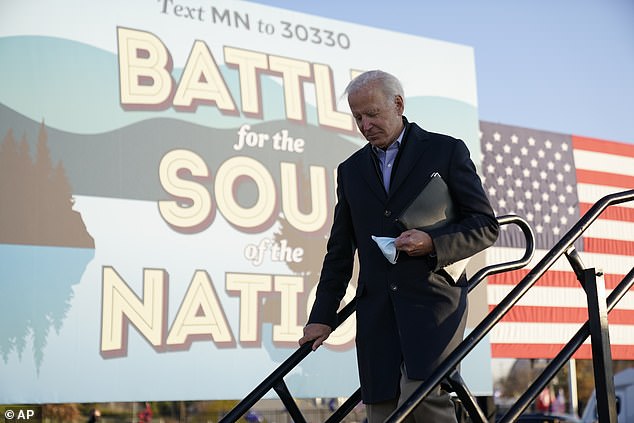 Biden (pictured) was a favorite among mail-in and early voters, while Trump was the preferred candidate among in-person and Election Day voters, the poll said

The new Fox News poll shows that Trump’s is the preferred candidate among white men at +17 points, rural voters at +18 points and white evangelical Christians at +50 points.

Biden, meanwhile, is the favorite candidate among women at +17 points, suburban women at +29 points, Hispanics at +18 points, Blacks at +66 points, and voters under age 30 at +32 points.

Biden is also said to be favored by a 10-point margin by senior-age voters and favored 54-32 per cent by independent voters.

‘Trump needs a few more points out of these groups to win re-election. But the main impediment is the stubborn stability of the race; it hasn’t changed much all year despite pandemics, economic collapses, and massive social unrest.’

Of those favoring Biden, 78 per cent that they felt ‘extremely’ motivated about voting, compared to 74 per cent that said the same and favored Trump.

Among early voters, Biden is ahead by 29 points.

But Trump leads by 16 points among Election Day voters.

The poll was conducted between October 27 to 29 by Beacon Research and Shaw & Company. The poll results were based on interviews with 1,318 randomly chosen registered voters nationwide and included results among 1,246 likely voters.

The poll has a margin of sampling error of plus or minus 2.5 percentage points for both registered and likely voters.

British hiker missing in Pyrenees is not in the mountains, rescuers believe

LA is told stay in their homes effective immediately

Upcoming Jessica Chastain Movies And TV: What’s Coming Up For The It Chapter Two Star