Supporters of former President Donald Trump marched down Fifth Avenue in Manhattan on Friday as they carried enormous banners that read ‘Trump 2024’.

The event was billed as a ‘Trump Save America Flag Unfurling’ and featured all sort of Trump signage including one banner that depicted House Speaker Nancy Pelosi as a demon.

Towards the end of the event, the Trump marchers clashed with some angry New Yorkers and which the Right Side Broadcasting Network claimed was a group of ‘Antifa’ and Black Lives Matter activists, leading to the arrest of six people. 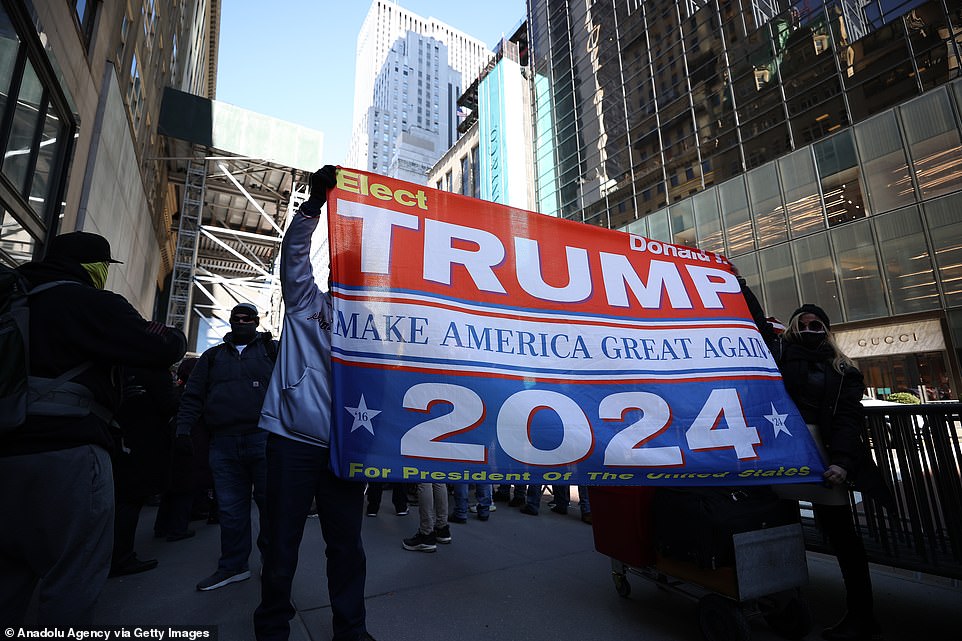 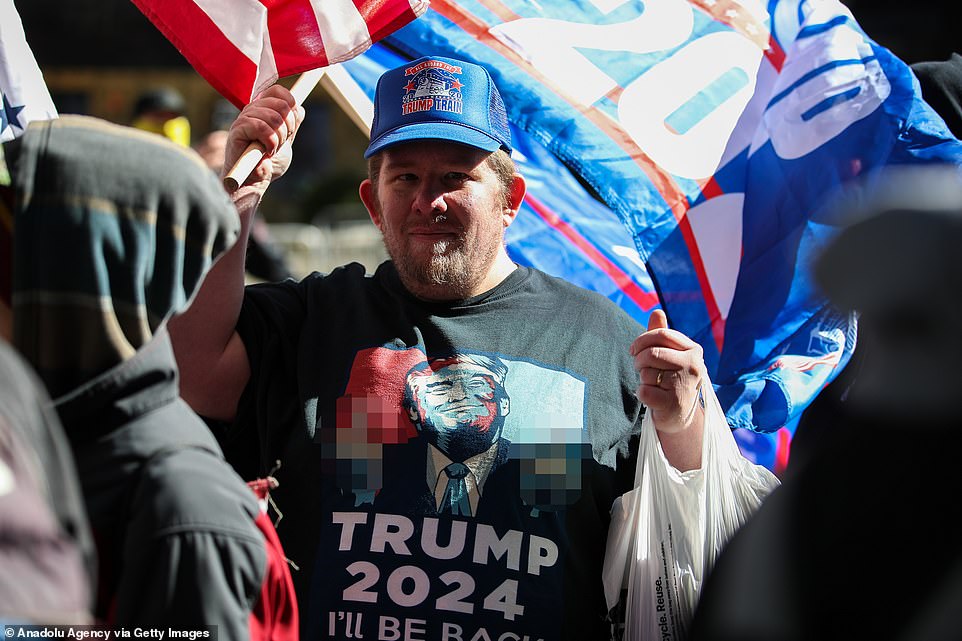 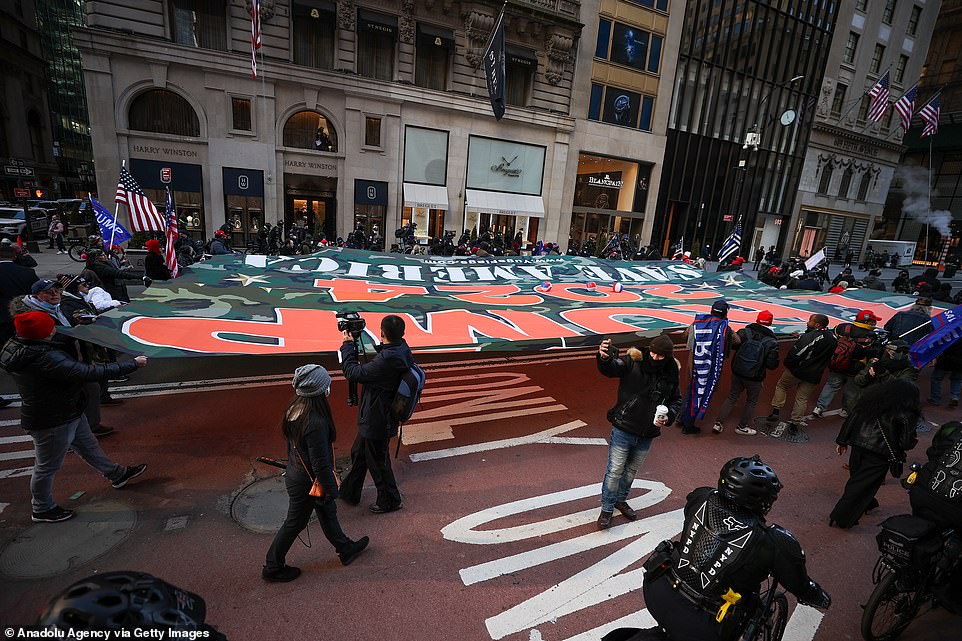 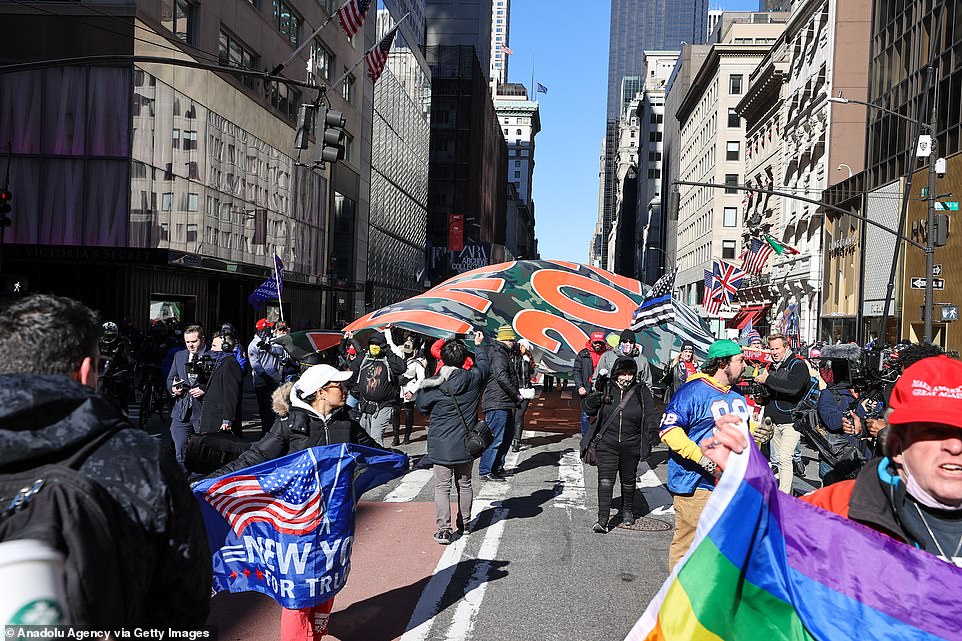 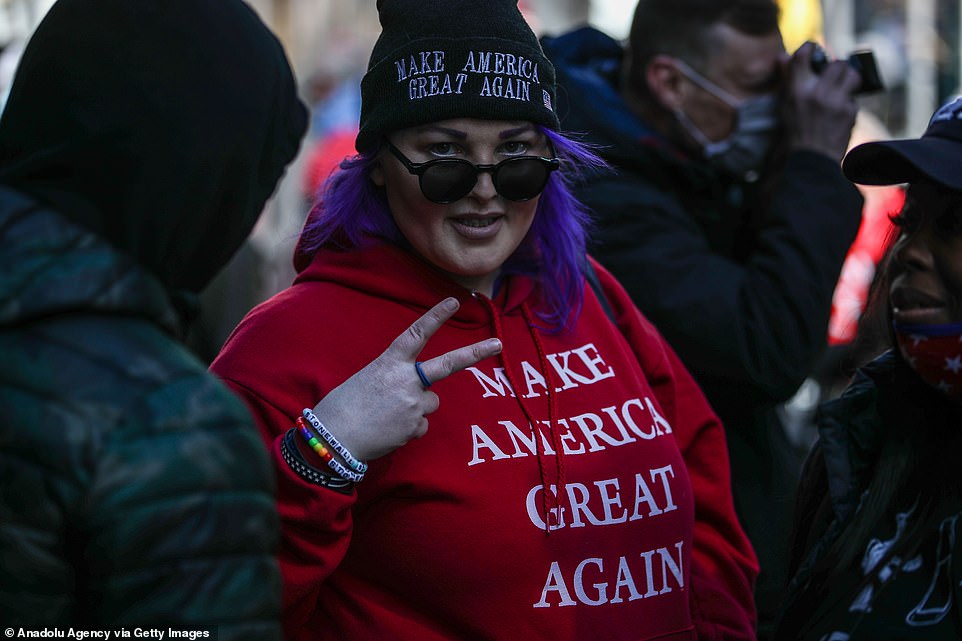 Trump publicly teased at the Conservative Political Action Conference last Sunday the idea that he is thinking of having another bid for the presidency.

The former president reeled off a list of his accomplishments during his term in the White House while repeating his false claim that he won the 2020 election adding, ‘Who knows? I may even decide to beat them a third time.’

Trump is said to be telling allies that he is strongly considering another run in 2024.

He said to be discussing alternative running mates to former Vice President Mike Pence as he takes stock of who he believes stood with him at the end of his term and who didn’t, according to Bloomberg. 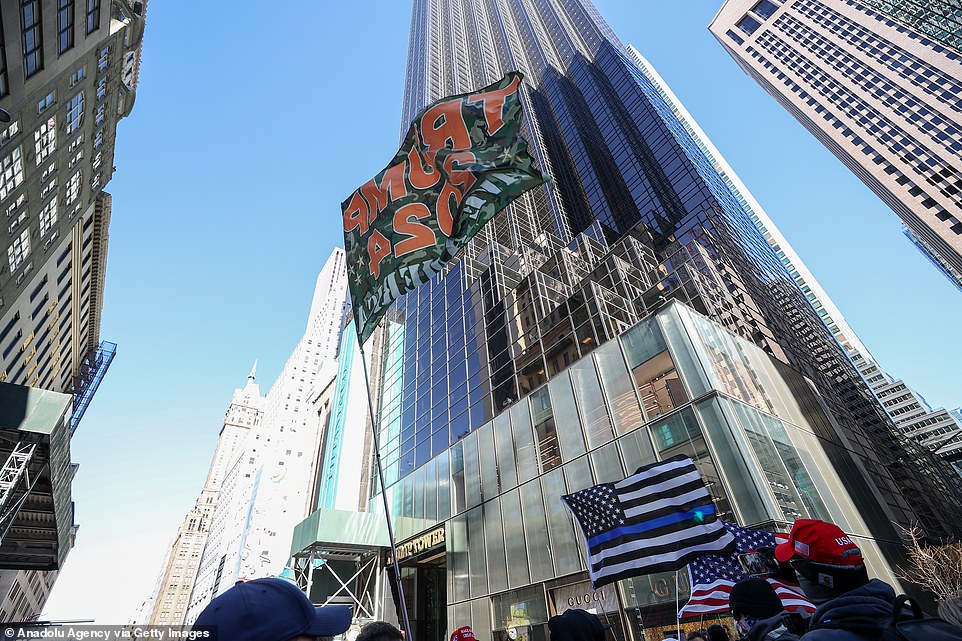 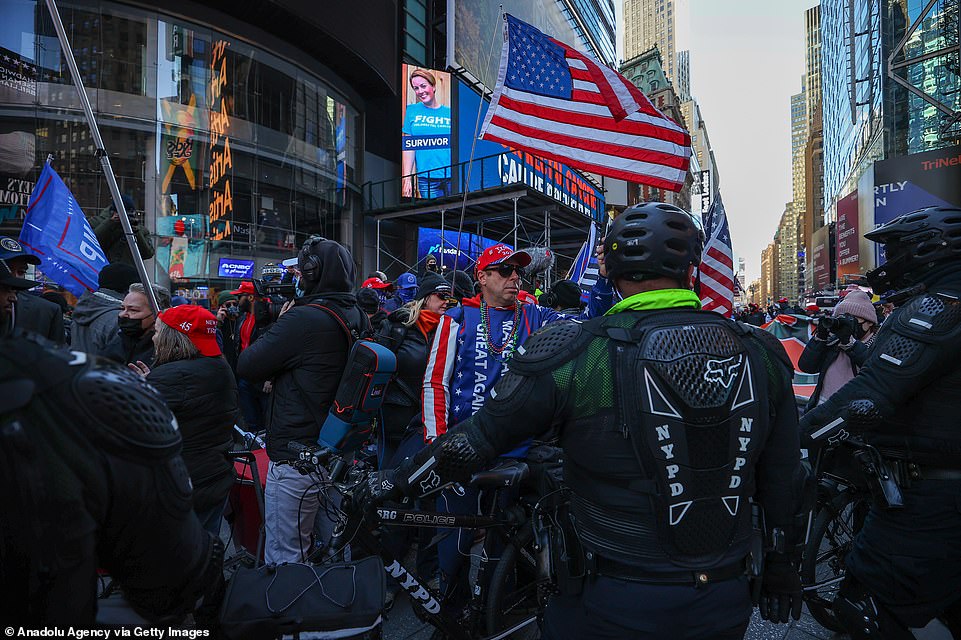 Trump and Pence appeared to fall out towards the end of their term after the vice president refused to get behind the president’s plan to overturn the 2020 election result.

Trump lashed out at Pence on social media for not trying to block the certification of the election results in Congress on January 6, an act that Pence had no constitutional authority to do.

After the Capitol riot, it was reported that Trump and Pence were not on speaking terms, with Pence said to bve livid at Trump.

The pro-Trump mob that then stormed the Capitol chanted that they wanted to execute Pence and came within seconds of him and his family. A total of five people died in the riot.

Although any announcement of a new White House Bid may be several years away, Trump’s musing over a 2024 run may effectively freeze the Republican field until the former president makes a decision one way or the other. 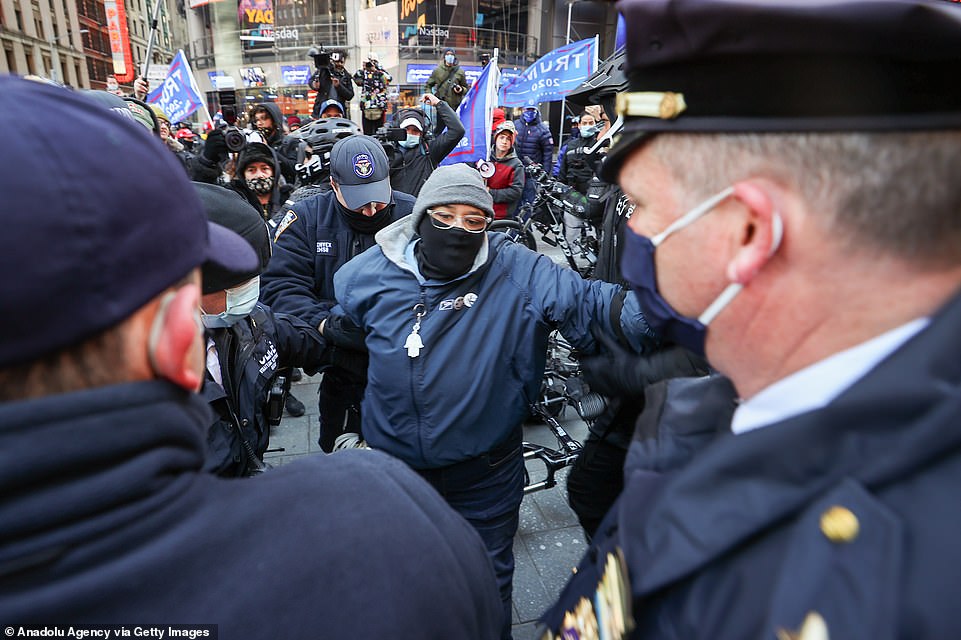 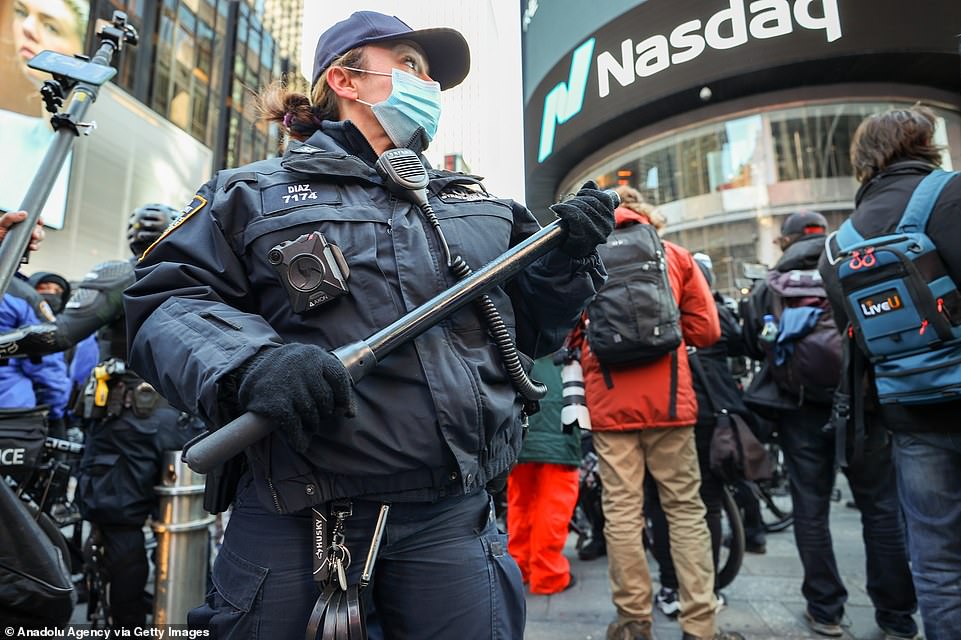 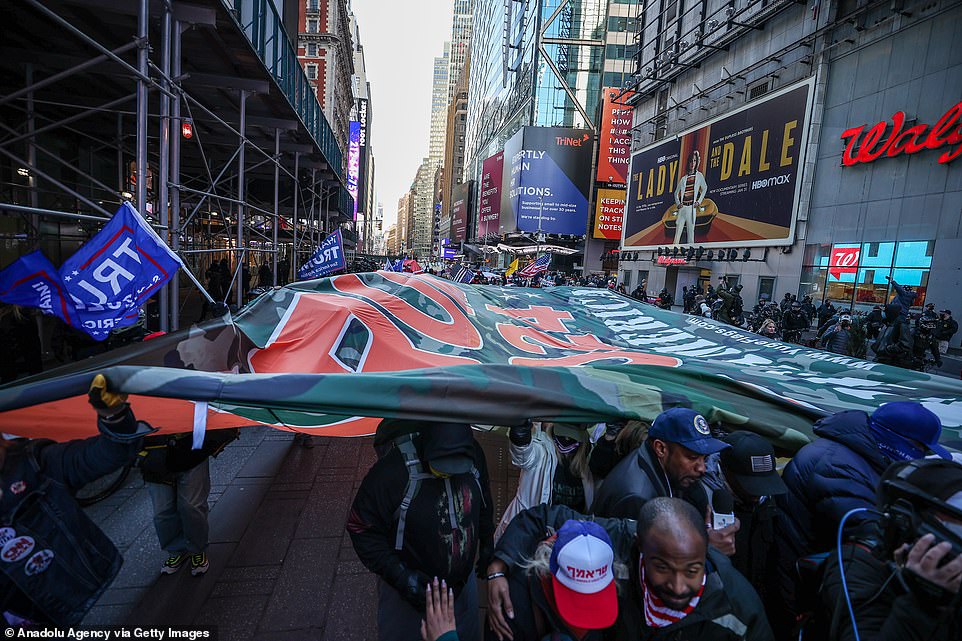 The enormous Trump 2024 banner was brought down by the group from outside Trump tower Times Square to Times Sq, about one mile away 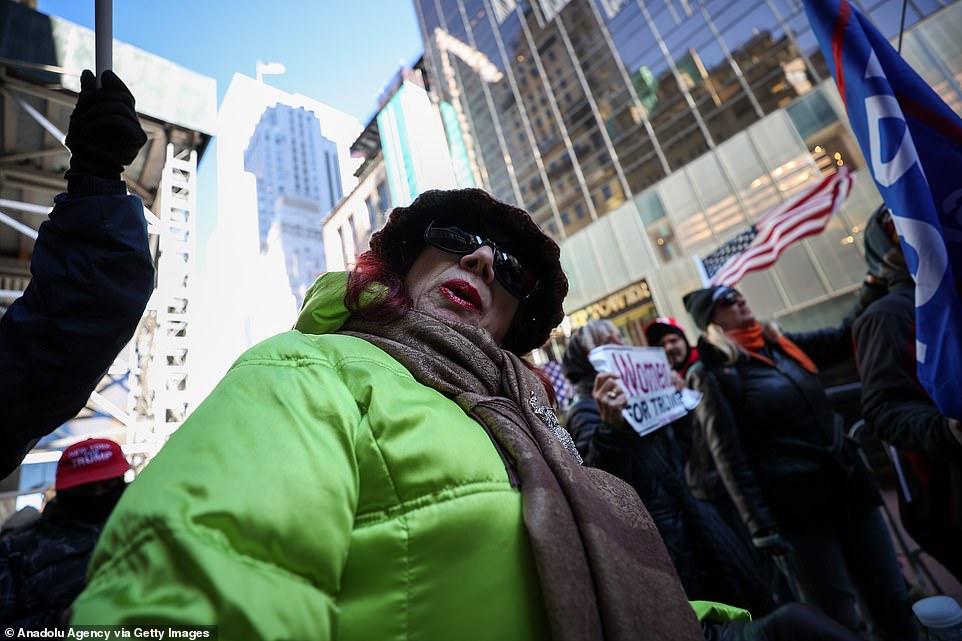 Where to shop in Sydney, from crochet to kaftans

Derelict abandoned home on one of Wales’ poshest streets goes under the hammer for £325,000

Don’t settle for anything less than the poshest chocs this year. SUDI PIGOTT picks the best…