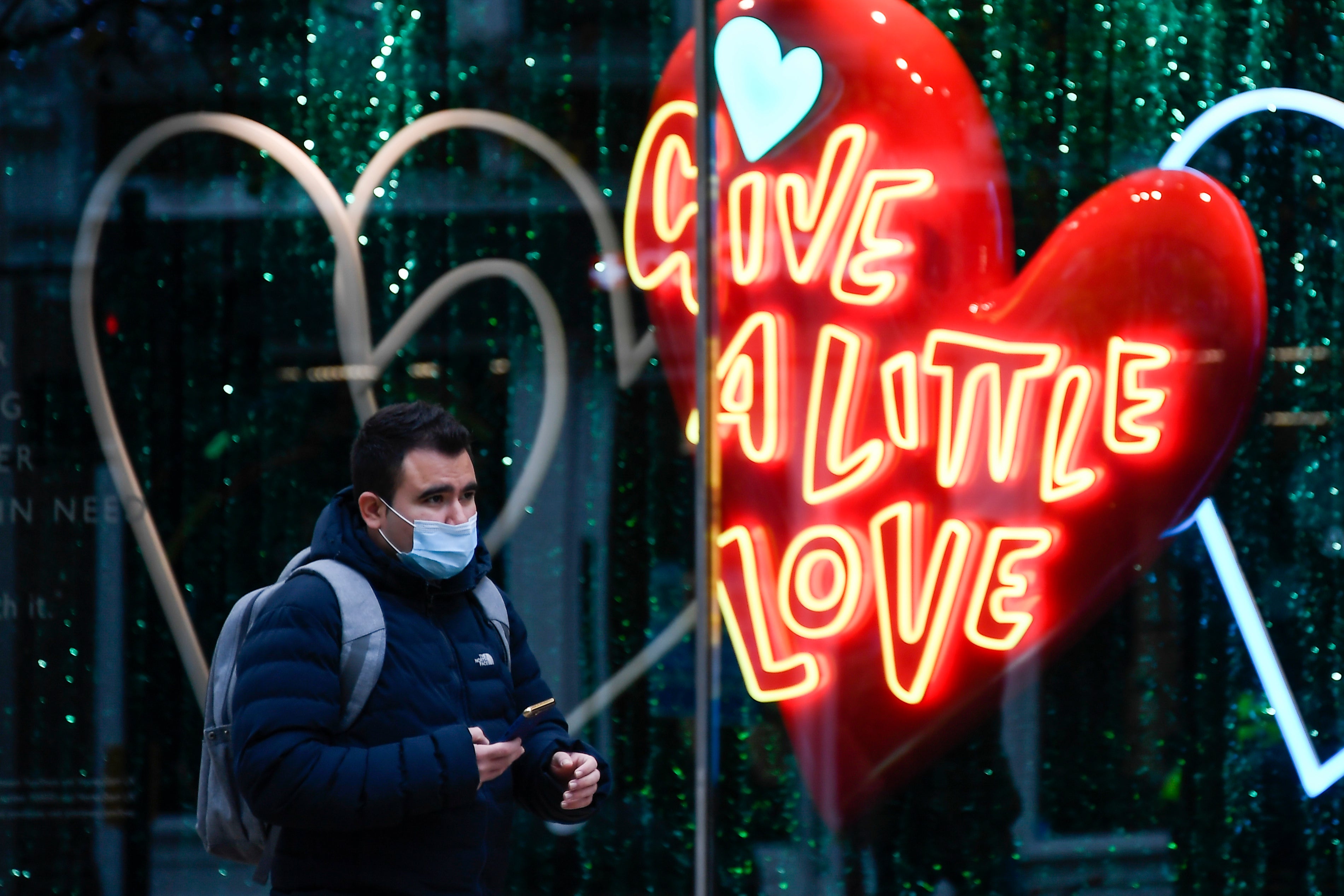 The new orders means the UK will have enough to innoculate around 3.5 million people with the Moderna jab alone, plus the millions of other deliveries expected from Oxford University and Pfizer.

Check back in tomorrow morning for all the latest updates. Goodnight.

Boris Johnson has warned there will be “disastrous consequences” for the NHS without the introduction of new tiered coronavirus restrictions when the national lockdown ends next week.

The Prime Minister, who is facing a rebellion from his backbenchers over the stringent measures, urged the nation to “work together” with tiering, testing and vaccines.

Writing in the Mail on Sunday, Mr Johnson said he believed Easter would mark a “real chance to return to something like life as normal”, but stressed that it was still too early to relax restrictions.

He said: “We can’t blow it now. We can’t just throw it all away – not when freedom is in sight. We have worked too hard, lost too many, sacrificed too much, just to see our efforts incinerated in another volcanic eruption of the virus…

“We are so nearly out of our captivity. We can see the sunlit upland pastures ahead. But if we try to jump the fence now, we will simply tangle ourselves in the last barbed wire, with disastrous consequences for the NHS.

“So let’s do the job properly. Let’s work together, and with tiering, testing and vaccines let’s make 2021 the year we kick covid out, take back control of our lives and reclaim all the things we love.”

Mr Johnson likened the development of effective vaccines to the “morale-boosting bugle-blasting excitement of Wellington’s Prussian allies coming through the woods on the afternoon of Waterloo”.

And he said: “If and when we can begin delivering those shots in the national arm – beginning with the most vulnerable groups – we will know we have won.”

Another two million doses of a coronavirus vaccine which trials suggest is 95 per cent effective have been secured by the Government.

It brings the total number of jabs on order from the US firm Moderna to seven million – enough for around 3.5 million people in the UK.

The vaccine has yet to be approved by the Medicines and Healthcare products Regulatory Agency (MHRA), but doses could begin being delivered next spring if it meets the standards.

Interim data suggests the jab is highly effective in preventing people getting ill and may work across all age groups, including the elderly.

The UK has placed orders for 100 million doses of the Oxford vaccine – enough to vaccinate most of the population – with rollout expected in the coming weeks if the jab is approved by the MHRA.

It also has orders for 40 million doses of the jab from Pfizer and BioNTech, which has been shown to be 95 per cen effective.

Health Secretary Matt Hancock said: “Every week, we are getting more positive news about the range of vaccines in development, and thanks to the work of our taskforce the UK has pre-ordered more hundreds of millions of doses from those companies most advanced in their work.

“This includes buying a further two million doses of Moderna’s vaccine, on top of the five million we’ve already secured.

“With a wide range of vaccine candidates in our portfolio, we stand ready to deploy a vaccine should they receive approval from our medicines regulator, starting with those who will benefit most.”

Business Secretary Alok Sharma added: “It is essential that we continue to bolster our portfolio of vaccine candidates to ensure we’re in the best possible position to protect the public once we see that breakthrough.

“The UK was one of the first countries in Europe to sign a deal with Moderna, and I’m delighted we have been able to secure a further two million doses of their promising candidate for the British public.”

And Kate Bingham, who chairs the Government’s Vaccine Taskforce, said: “Since its inception in June, one of the most important stated aims of the Vaccines Taskforce has been to secure access to the most promising vaccines across a broad range of technologies – thereby increasing the chances of having a safe and effective prevention as soon as possible against Covid 19.

“Moderna’s vaccine was an important addition to our portfolio and securing an additional two million doses further adds to the protection we can provide to the public to end the pandemic.”

A union has told of its “grave concerns” over plans for mass coronavirus testing for students, warning that “flaws” in the Government’s approach are a “recipe for chaos”.

A seven-day travel window has been announced so students can spend the festive period with their families, with additional testing offered before they depart.

Students will be encouraged to take an asymptomatic test at “targeted” universities in England, while teaching will move online by December 9 so they have enough time to self-isolate if needed.

But the University and College Union (UCU) said plans appear to have been “rushed” and raised concerns around the accuracy of tests.

Earlier this month experts suggested that relying on rapid tests that give a result in minutes could mean a high proportion of cases are missed with false negative results.

Jon Deeks, professor of biostatistics at the University of Birmingham, said the Innova lateral flow test – which has been used in the Liverpool mass screening pilot – detects 73% of cases when patients are tested on a site with experienced research nurses.

But this falls to 57% among self-trained staff members at a testing centre.

An evaluation by Oxford University and Public Health England workers at Porton Down concluded the test has an overall sensitivity of 76.8% – but it detects almost all cases among patients with a high viral load.

UCU general secretary Jo Grady said: “The flaws in Government plans for mass testing are a recipe for chaos that risk spreading the virus.

“We have grave concerns over how this programme will be carried out, particularly the risk of students being told – incorrectly – they do not have Covid, then relying on their test result to travel home and spend Christmas with vulnerable relatives.

“The risk of students receiving the wrong test result increases when testers have not been fully trained – rushing these plans makes that more likely.”

The union accused the Government of not listening to warnings about the likely impact of the mass movement of students to university campuses back in September, and said there were risks with the Christmas plan.

Ms Grady said: “By choosing to continue with in-person learning until the last-minute, ministers are gambling with the safety of staff, students and the nation, betting everything on an untried testing programme, and a mass movement of students in a window shorter than two weeks.”

She said university staff need to be able to plan now for how they will teach students next term, and that if guidance for January is not given soon “ministers are helping to sow the seeds of the turmoil we saw in September”.

The UCU said it has launched a legal challenge over the Government’s decision not to move university learning online at the beginning of this academic year.

Here’s the latest on those heated protests:

Police have stopped 110 drivers for Covid-19 offences during the first 24 hours of random checks in Cardiff.

Officers in the Welsh capital were granted powers to stop and fine drivers from 9am on Friday in an effort to prevent people from outside the nation travelling into its capital.

South Wales Police said they handed out 12 fixed penalty notices in the first day, and warned a further 15 people, instructing them to leave Cardiff.

People from high-risk areas outside Wales are prohibited from travelling into the country under Welsh Government rules.

Those found breaching the legislation included a couple travelling from Essex who told officers they were heading to Cardiff to give family Christmas presents, and a group of nine people travelling in convoy to visit friends at university.

Cardiff and Vale of Glamorgan Chief Superintendent Wendy Gunney said: “I would like to thank the vast majority of people who are enjoying their weekend with caution and within the confines of the existing regulations, but those not adhering to the rules are continuing to put others at increased risk.

“The measures which are in place are in place for a reason. Our checks will continue throughout the weekend, and anybody blatantly flouting the rules, which have been made very clear, face being fined.”

Police were given the temporary extra powers following concerns that groups of people from locked-down areas of the UK where pubs and bars are closed helped pack out Cardiff city centre’s streets last weekend.

South Wales Police said alongside the vehicle checks, they have had more officers on duty, and these changes will be in place until 5pm tomorrow – covering the final weekend of England’s lockdown.

Here’s the moment Santa was arrested at today’s anti-lockdown protest:

Meanwhile, health authorities reported 1,747 Covid-19 cases today, bringing the total since the first case was detected in February to 103,034.

The country is under lockdown until December 7, with repeated appeals to the public to conform to distancing regulations.

“I really ask for some more patience and one more effort ahead of Christmas,” Mr Mitsotakis said.

A two-month lockdown in March helped contain the spread of infections but a renewed spike since October prompted new restrictions.

Responding to the anti-lockdown protests, Home Secretary Priti Patel said: “We’ve seen our police officers yet again do incredible work to ensure that they help to stop the spread of this awful virus.

“The people that are protesting today have been protesting for many months, and we’ve seen this over successive weekends.”

She added: “We ask everybody to be conscientious – we all know the regulations and the guidance, we have brought these measures in to save lives and to prevent preventable deaths.”

Ami, the tiny cube on wheels that French 14-year-olds can drive