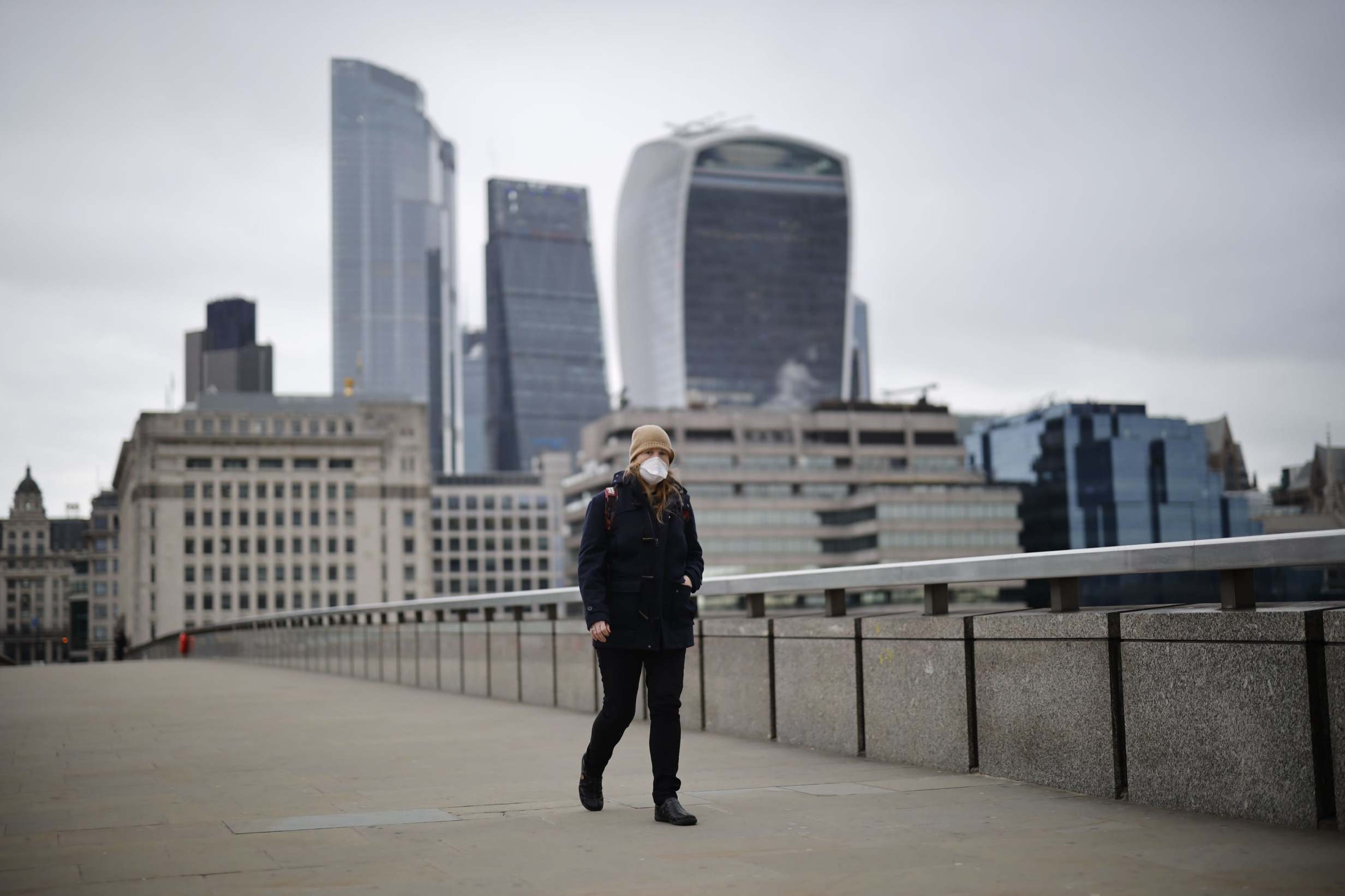 The new figures takes the rate across the city to 173.7 per 100,000 population, up from the previous record of 158.5 last Thursday. The number of Covid patients in London hospitals also increased to 1,244, the highest level in six months.

Moderna vaccine will be much easier to distribute

Moderna president Dr Stephen Hoge said the temperature at which the US firm’s vaccine could be stored meant that vaccinations could potentially be carried out in the community.

Speaking to BBC Radio 4’s World At One programme, he said: “What we’re able to do with the vaccine now which is six months at freezer temperatures of -20C and up to 30 days at a refrigerated temperature of 2-8C, it really means you can deliver this vaccine into local and in fact rural GP offices or even pharmacies.

“And that means it requires no special infrastructure, no equipment and hopefully you’re going to be able to do broad-based vaccination where people are as opposed to bringing them into centralised vaccination clinics.”

Dr Stephen Hoge, president of Moderna, said he hoped to provide “substantial quantities” of the US firm’s coronavirus vaccine to the UK, pending negotiations with the Government.

Asked about whether the UK had managed to purchase any of the successful vaccine, Dr Hodge told BBC Radio 4’s World At One programme: “Haven’t bought yet, but as your Government disclosed and as we’ve said, we’re in advanced discussions and looking forward to being able to supply substantial quantities of the vaccine to the UK Government for use in the United Kingdom.”

Pressed on whether the roll-out could be done quickly, he replied: “It depends a little on concluding those negotiations. I don’t want to get too far ahead of ourselves.

“But we do have the ability to supply in the early part of next year and certainly we hope substantial quantities by the spring.”

Parts of Scotland could move up to ‘Tier 4’ lockdown

Moving to Level 4 restrictions for a short period could see an easing of measures at Christmas, Nicola Sturgeon has said.

The First Minister said at her daily briefing on coronavirus that the prevalence of the virus, particularly in the west of Scotland, was “stubbornly high”.

She said: “A stubbornly high prevalence means that we might have less flexibility to offer some limited and careful easing of restrictions over the Christmas period, which we are very keen to do.”

Moving to the most strict restrictions “for a limited period”, Ms Sturgeon said, would help the Scottish Government address the issue of Christmas as well as ensuring NHS capacity is protected.

Speaking ahead of the announcement of changes to the framework on Tuesday, Ms Sturgeon urged people to adhere to local measures, saying: “Every time we stop someone, especially someone who is older and more vulnerable, then we give them a chance of living into the era – which is firmly on the horizon – where better therapies, vaccines, testing and treatments will be available.

“I think that motivation as we are living under these restrictions right now is important to bear in mind.

“The end is not quite with us but we can see hope on the horizon now that we couldn’t see just a few weeks ago.”

Authorities to have ‘pipeline’ of vaccines to choose from

Professor Trudie Lang, who runs the Global Health Network at the University of Oxford, suggested it was unusual to have a “pipeline” of vaccine candidates in development.

She told BBC News: “We’ve got these two messenger RNA vaccines through now and there are other technologies hopefully coming through.

“And it would be a fantastic position to be in to have, you know, maybe three or four different vaccines that come through over the next coming weeks and months, and can maybe even do slightly different jobs, but certainly assure supply around the world.”

Prof Lang said that “we need to just wait and see” what data on the Pfizer and Moderna vaccines showed.

She added: “We don’t fully know yet what sort of protection these vaccines are going to give, whether they’re going to prevent illness and stop transmission or both and it could be that some of the vaccines that come along later, do a slightly different job.

“So until we really have a full understanding of that, which we won’t over the next coming months, then the health authorities can make a decision on which vaccine to use most appropriately in different situations.”

People in Wales should not expect a “definitive statement” on Christmas in the next few days or weeks, Health Minister Vaughan Gething has said.

Mr Gething told a press conference that he had seen images of people who had “forgotten about social distancing and are returning to a more normal way of behaving”.

“If that continues, then we really will face difficult choices and we’re likely to see the trend that we’ve already seen with reducing cases, that could easily reverse,” Mr Gething said.

“This is a highly infectious virus that thrives on human contact. It’s also why we can’t have a definitive view at this point about what Christmas might look like.

“Whatever happens with Christmas and the festive season this year, it won’t be like normal.

“We’re still discussing issues about where we can get to with other governments across the UK on travel, and we’re still looking at the evidence about what we might be able to do around contact, but it does rely on the picture that we’ll see in the developing evidence over the coming weeks.”

Cases of coronavirus are continuing to fall in Wales following the country’s firebreak lockdown, the country’s Health Minister Vaughan Gething has said.

“On Friday, I said we’re starting to see some early very positive signs that cases of coronavirus are beginning to fall,” Mr Gething told a press conference in Cardiff.

“This downward trend is continuing. The seven-day incidence rate for Wales is now around 160 cases per 100,000 people – a reduction of 70 from this time last week.

“In Merthyr Tydfil, which had the highest rates in the UK just over a week ago, the rate has more than halved to around 330 cases per 100,000 people.”

Mr Gething said that other parts of the South Wales Valleys, which also saw “very high” rates, now had an incidence rate of less than 300 cases per 100,000 people.

Professor Trudie Lang, who runs the Global Health Network at the University of Oxford, described the news of the efficacy of the Moderna vaccine as “remarkable”.

Speaking to BBC News she said she had worked on malaria, TB and Ebola vaccines but “we’ve not seen anything like this before”.

Commenting with reference to the previous announcement over the effective Pfizer vaccine, Prof Lang said: “Having data from two different vaccines, the same technology on two completely different trials, but showing the same outcomes is really exciting.”

Asked how the vaccine progress had come about, she said: “The reason why we are in such a good situation with Covid is we’ve just had this enormous collaboration and global focus.”

She explained scientific collaboration and learning from work on an Ebola vaccine had been brought into the work around coronavirus.

The Government is working to procure the new vaccine

A Whitehall source said the Government was “in advanced discussions” to procure doses of the Moderna vaccine.

The vaccine candidate is not currently among the potential treatments that ministers have signed orders for.

Dr Stephen Hoge, president of Moderna, said he “grinned ear to ear” when learning about the efficacy of the US firm’s coronavirus vaccine.

He told BBC News: “When we got the news from the data and safety monitoring board, I’ll admit I broke character and grinned ear to ear for a minute.

“Because I didn’t expect, I don’t think any of us really hoped that the vaccine would be 94% effective at preventing Covid-19 disease, that was really a stunning realisation.

“But the second thing that was perhaps even more exciting was that it was 100% effective, apparently, at preventing severe Covid-19 disease.

“There were 11 cases of severe disease, but all 11 were on placebo, none of the vaccine recipients had had severe Covid-19.

“And those combination of facts mean that the vaccine really is a terrific tool for stopping the pandemic and hopefully stopping the worst of the disease that people are facing.

“When you combine it with the news of last week of Pfizer’s vaccine, you’ve got now two vaccines that are over 90% effective.

“It really means I think we have the tools necessary to finally beat this virus back and I think that’s probably the best news of the day for all of us, is that there really are now solutions in our hands and we need to deliver them to the people who can use them.”

Britain isn’t ‘recovering’, whatever the Bank may suggest

5 a.m. rooster crows and other rural ‘sounds and smells’ are now protected in this country