Large golf ball-sized hailstones have pelted parts of England today, as 60mph sweep heavy showers across the South and weather experts warn of up to six inches of rain over the next 36 hours.

The huge hailstones crashed down in Cirencester, Gloucestershire, as parts of Britain were today put under a ‘danger to life’ warning ahead of the torrential downpours – which could make it the wettest month London has faced for 150 years.

The Met Office said flooding could affect homes and businesses, along with transport delays and communities becoming cut off by flooded roads in Wales, North West England and Pennine areas of North and West Yorkshire.

The yellow ‘be aware’ warning runs between noon tomorrow and the end of Friday, and the largest rainfall totals are expected on high ground, particularly in Wales and Cumbria, where up to 6in (150mm) could fall.

It comes as Londoners may be experiencing the wettest month for more than 150 years, as the capital endures one of the wettest Octobers to date and could have the most rainfall it has seen in any calendar month.

October is usually the wettest month in the UK and rainfall this year has been largely concentrated in Greater London and the home counties of South East England as well as a small area of North East Scotland.

London has had 139mm (5.5in) of rain up to October 25, nearly double the full month average of 78mm (3.1in), meaning October 2020 is already ranking ninth rainiest in London since 1862 with six days of data still to collate. 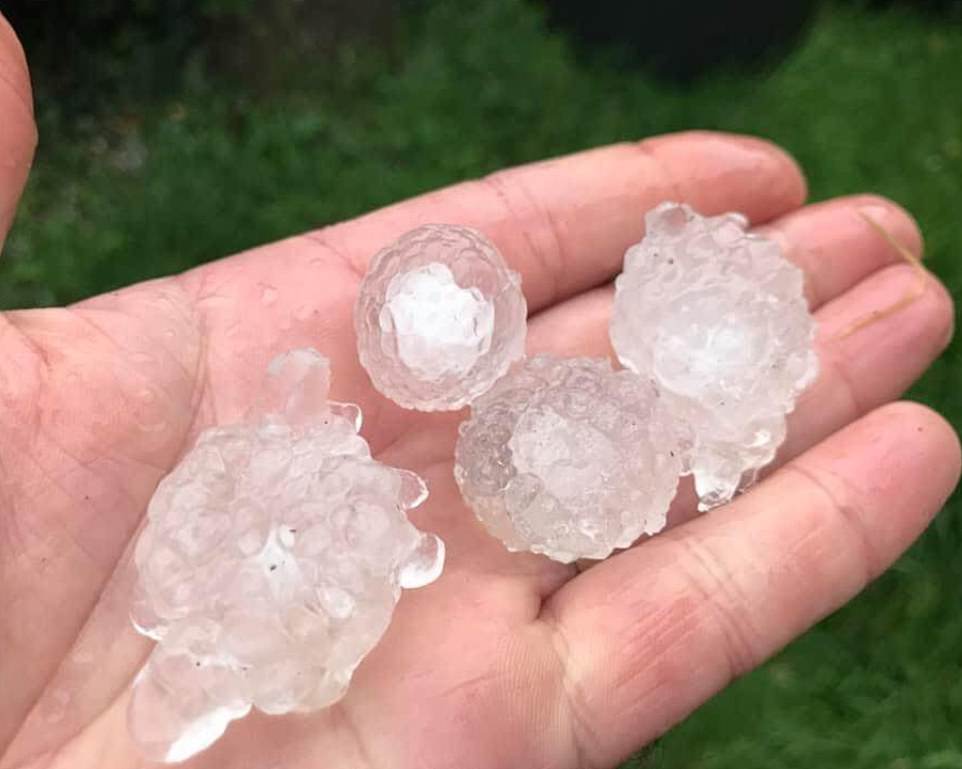 The massive hailstones crashed down in Cirencester, Gloucestershire, as parts of Britain were today put under a ‘danger to life’ warning ahead of the torrential downpours – which could make it the wettest month London has faced for 150 years 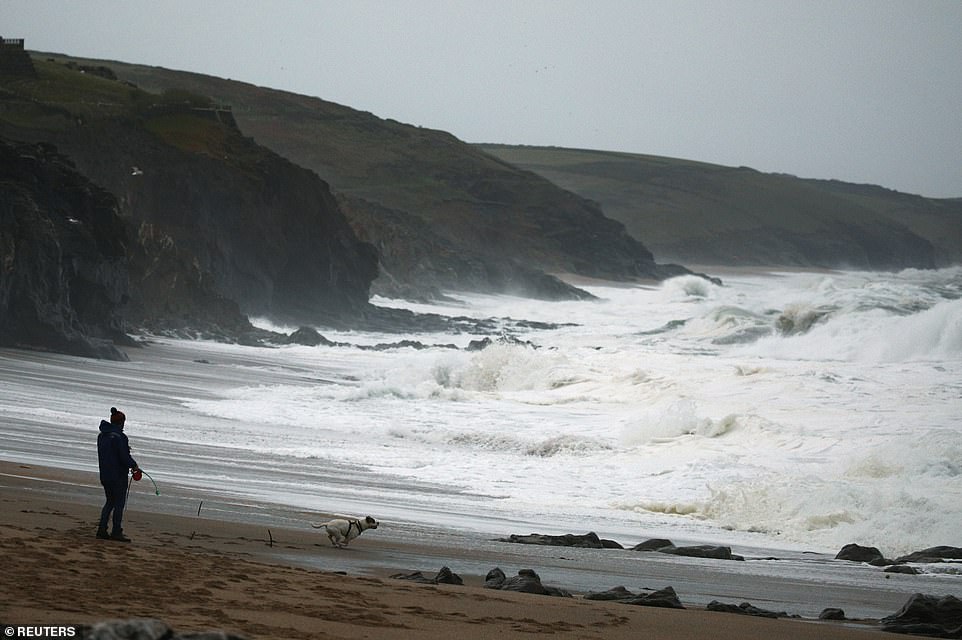 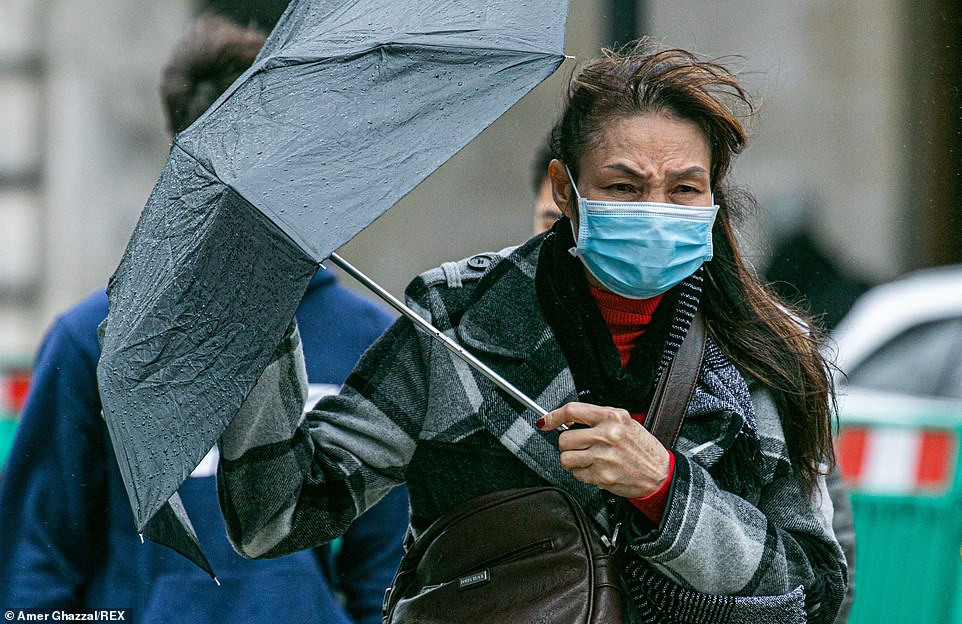 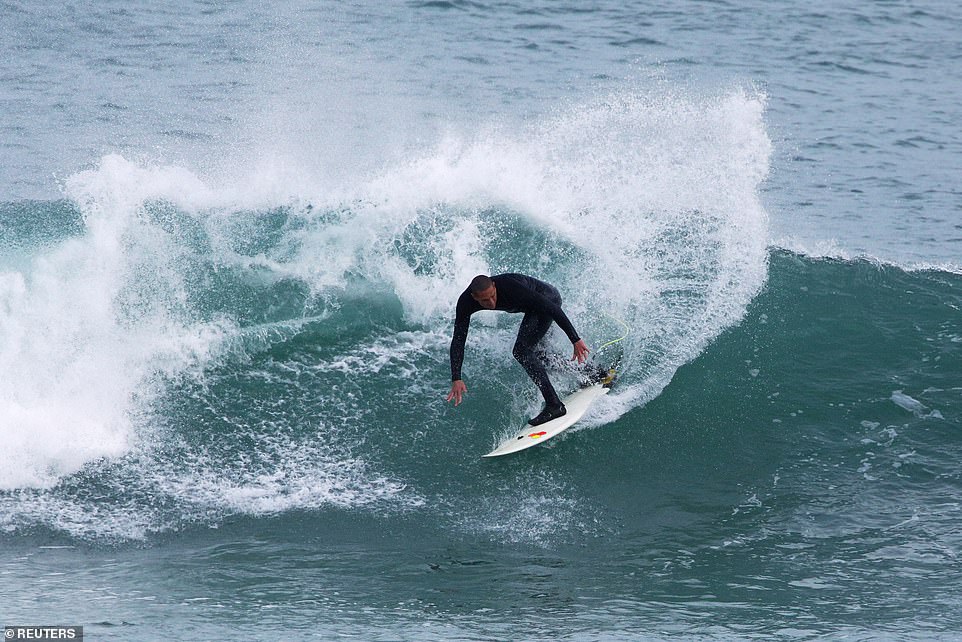 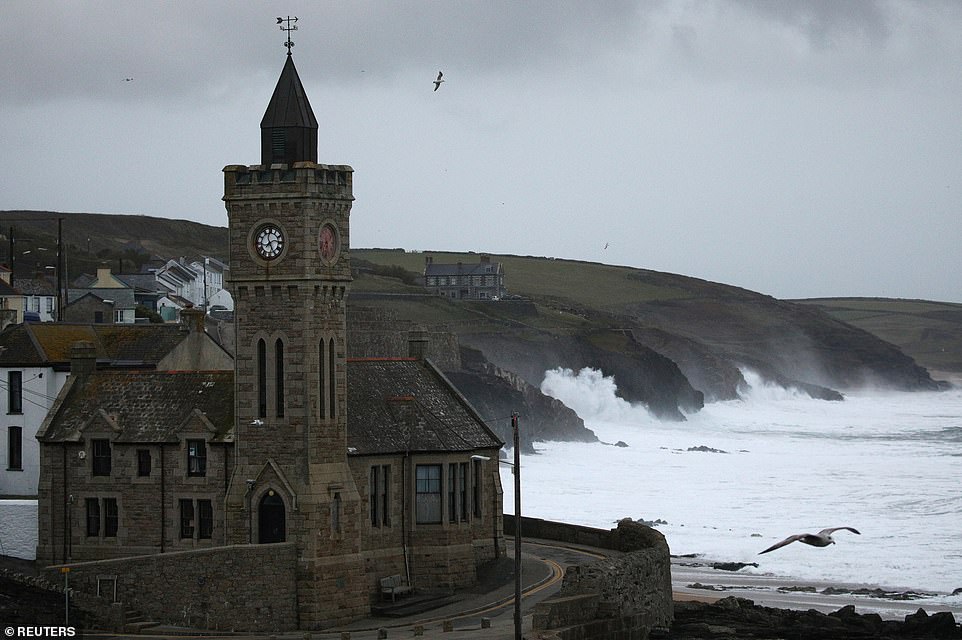 Speaking about the weather over the next few days, a Met Office spokesman said: ‘Periods of heavy rain are expected to develop across Wales and northwest England during Thursday and Friday. 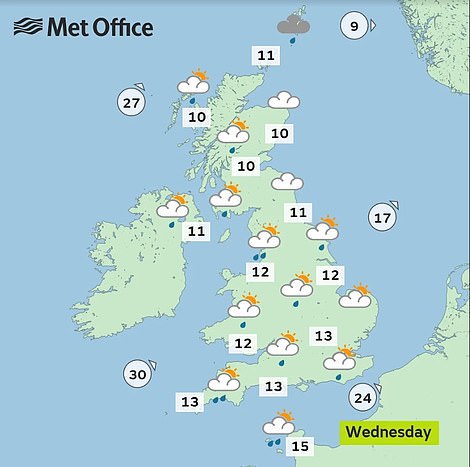 ‘The heaviest rainfall, however, is expected to be across the hills and mountains of northwest Wales and Cumbria, where 100mm (4in) to 150mm (6in) of rainfall is possible by the end of Friday.’

The weather warning states ‘fast flowing or deep floodwater’ could cause ‘danger to life’. Rain is also expected elsewhere across the country tomorrow and Friday, although not as heavy.

Today is due to be ‘rather cold with blustery showers’ easing later in the day. More showers and longer spells of rain are expected at the weekend.

But forecasters say the start of November could see unsettled conditions giving way to a drier and brighter – but colder – spell including the first widespread frosts of the season.

The Met Office said: ‘A change to generally drier, more settled conditions is probable during early November with any strong winds, showers or longer spells of rain most likely confined to northern areas. 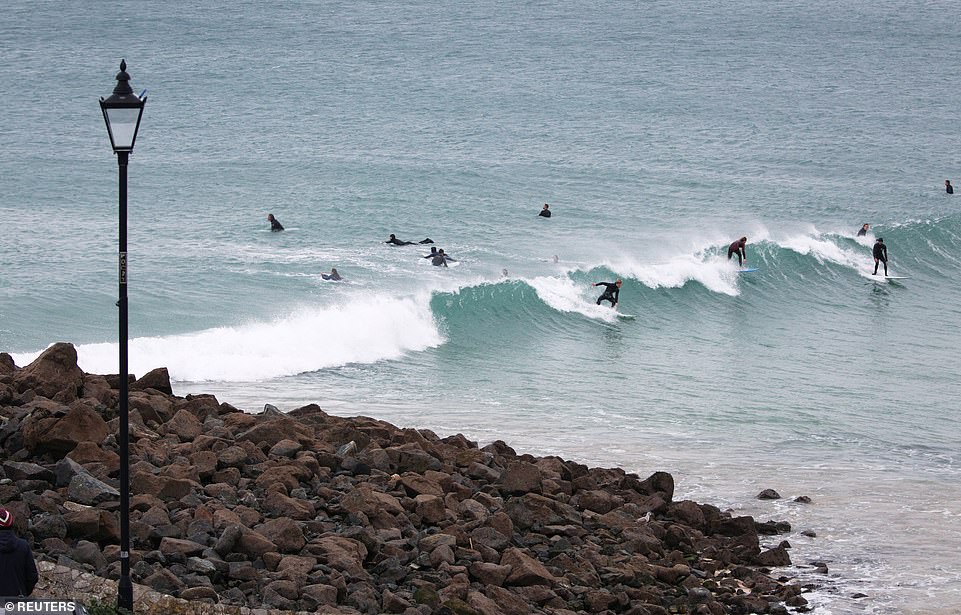 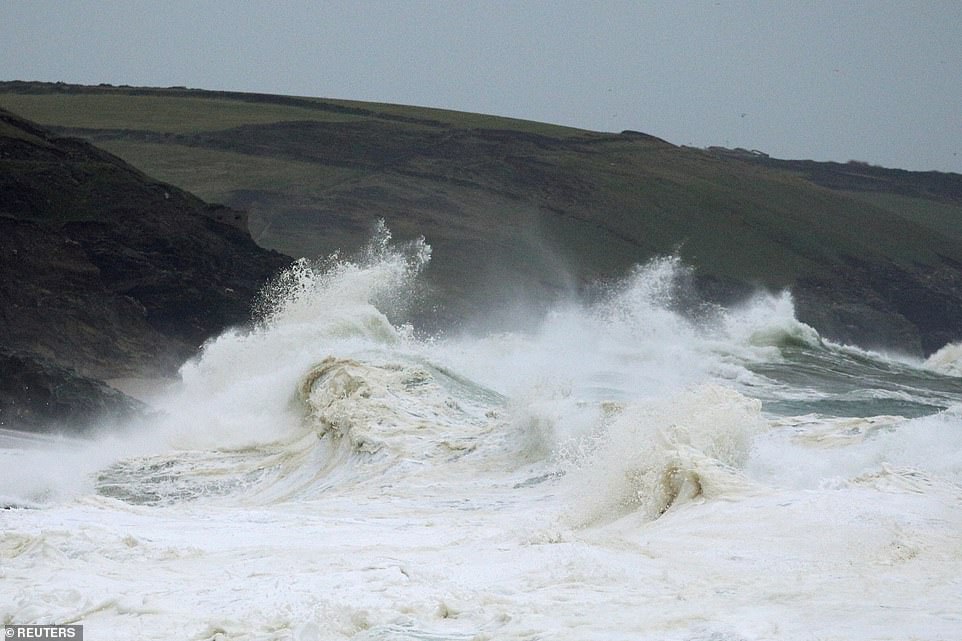 Speaking about London, Met Office spokesperson Grahame Madge said with ‘considerable rainfall’ expected in the coming days it is ‘quite likely’ this month will break the October record, and potentially for any month. 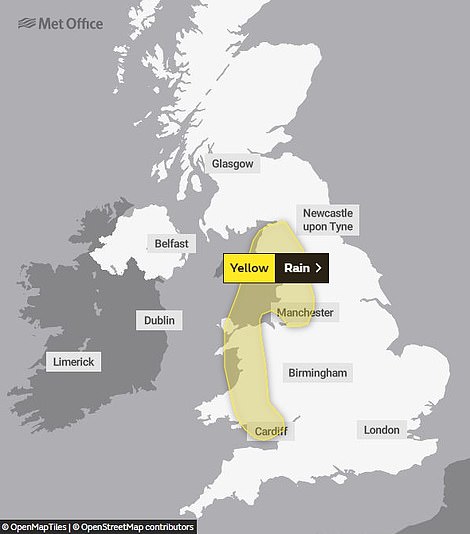 The weather warning runs from noon tomorrow until the end of Friday, and covers Wales and North West England

Mr Madge said: ‘The wettest calendar month on record was November 1940 with 171.2mm (6.7in) of rainfall. Breaking this record) would require an extra 32mm (1.3in) of rainfall before the month end.

October 3 was the wettest day on record for the UK, with enough rain falling to more than fill Loch Ness.

The Saturday, which was just after Storm Alex hit, saw an average of 31.7mm across the nation, beating the previous record of 29.8mm on August 25, 1986.

Although Greater London and the home counties are experiencing a particularly wet October, rainfall around the UK has been only ‘slightly above average’, Mr Madge said.

‘Virtually everywhere was wet on October 3, but since then there have been pockets of the UK which has seen higher rainfall totals, especially London and parts of the south-east,’ he said.

‘This is because of the way the jet stream has steered low-pressure systems more to the south of England.’ 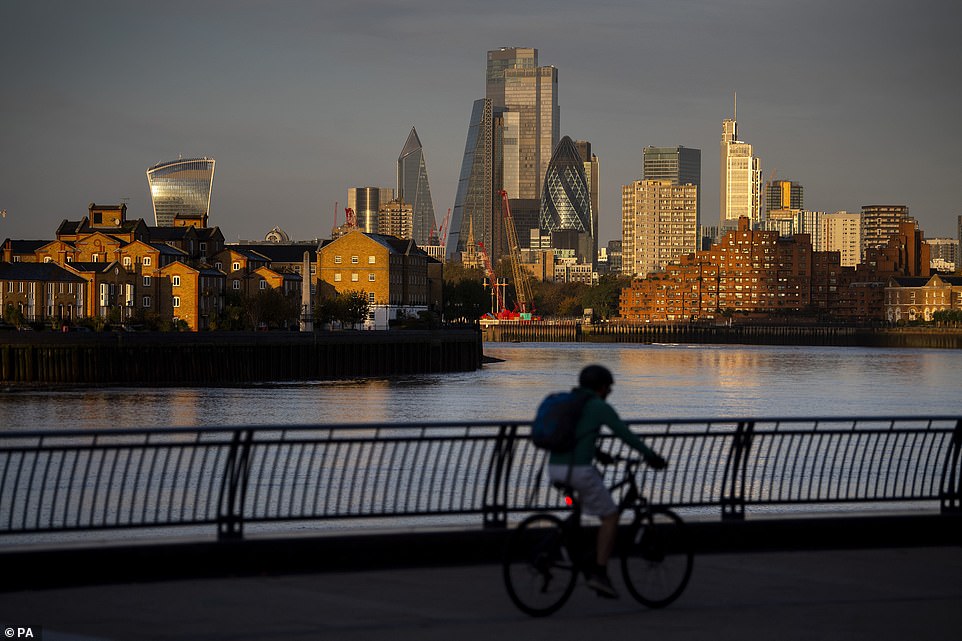 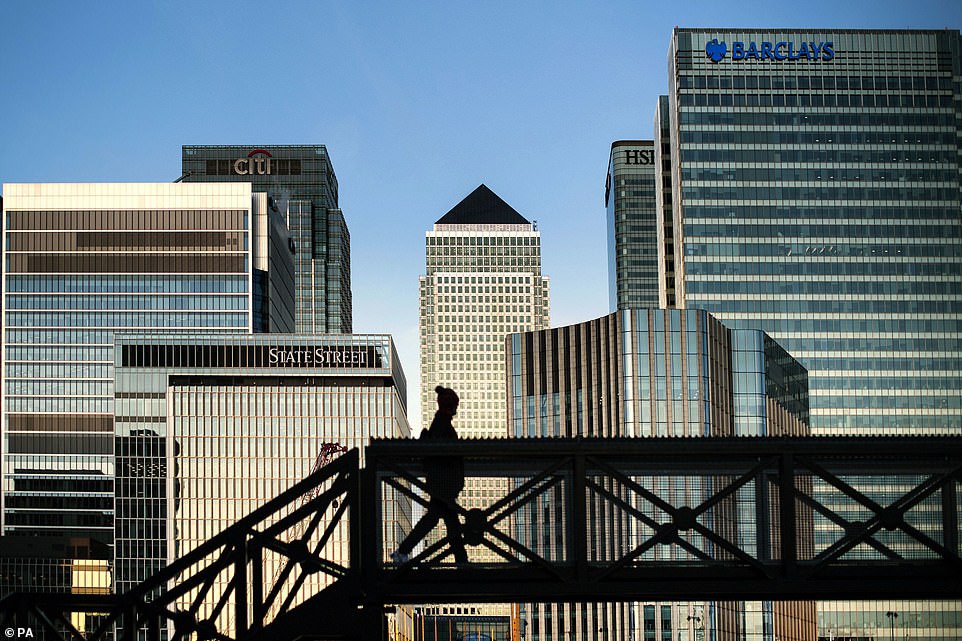 The wettest month for the UK in 2020 so far was February, when many regions were hit with devastating floods which destroyed homes and businesses.

Mr Madge added that climate change is having a ‘pronounced effect’ on temperatures in the UK, raising averages by about 1C (1.8F) since pre-industrial times, and the warmer atmosphere could be causing increased rainfall too.

He added that UK climate projections show warmer, wetter winters and hotter, drier summers will lead to ‘more extreme rainfall records’ by the end of the century.

Hertfordshire is also seeing its ninth wettest October since 1862, with Bedfordshire, Berkshire, Buckinghamshire and Oxfordshire experiencing their tenth soggiest.

In North East Scotland, this month is the third wettest for Moray, fourth for Banffshire, sixth for Kincardineshire, seventh for Aberdeenshire, and ninth for Nairn and Angus.

Here are the latest coronavirus updates from the Northeast