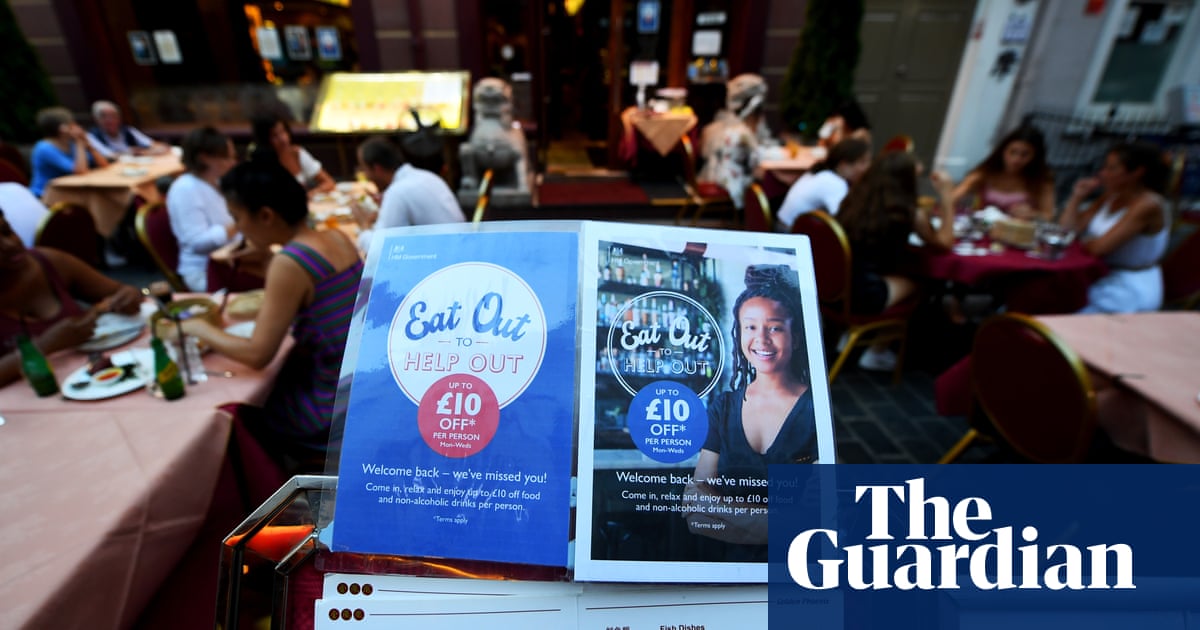 UK inflation dropped sharply to 0.2% in August after the government’s eat out to help out scheme pushed down restaurant and cafe prices.

The fall in the annual consumer prices index (CPI) last month followed a rise of 1% in July, illustrating the dramatic influence on prices of the restaurant subsidy scheme that operated for a month to the end of August.

Eat out to help out was hugely popular, with at least 100m subsidised meals eaten by diners in the UK during the month.

The Office for National Statistics said the downward pressure on prices also came from falling air fares and clothing prices rising by less between July and August 2020 than between the same two months a year ago.

However, the temporary drop is unlikely to influence Bank of England officials when they meets on Thursday to discuss the economy. Members of the central bank’s monetary policy committee, who have the task of maintaining inflation at about 2%, are expected to maintain the base rate at its all-time low of 0.1% and the quantitative easing stimulus programme at £745bn.

They are expected to be influenced by figures for core year-on-year CPI, which was up 0.9% against expectations among City economists for a rise of only 0.5%.

Thomas Pugh, a UK economist at Capital Economics, said the fall in inflation to 0.2% probably represents the low point. “But a sustained rise to 2.0% seems unlikely within the next few years,” he said.

Neil Birrell, the chief investment officer at the asset manager Premier Miton, said the rise in core inflation was more indicative of the bounceback in economic activity during the summer months as the lockdown eased and more people went back to work from being on furlough.

“Rising inflation has been much discussed as the inevitable consequence of all the stimulus being injected into the economy. Policymakers won’t be worried about this number; they are more likely to be pleased there is activity in the economy,” he said.

The ONS said the largest upward contributions to average prices came from games, toys and hobbies, accommodation services, road transport services and secondhand cars, where there was a rise in sales and prices in August.

Prices rose unexpectedly in July after the largest monthly increase in petrol prices for almost a decade and a lack of summer sales on the high street as non-essential shops reopened.

Teen with rare leukemia ‘overwhelmed’ after strangers donate £500,000 to pay for treatment

Woman charged with murder of boy, 10, in west London