Cyprus and Lithuania have been removed from the Government’s list of travel corridors, meaning travellers arriving in the UK from those places after 4am on Sunday must self-isolate for 14 days, Transport Secretary Grant Shapps said on Thursday.

Shapps added in a post on Twitter that the Government would not be adding any countries to the UK’s list of travel corridors where Britons can travel without having to self-isolate this week.

Cyprus recorded just 91 new coronavirus cases on Tuesday while Lithuania had 413. Both totals are considerably lower than the UK figures, which showed 22,885 new cases on Tuesday. 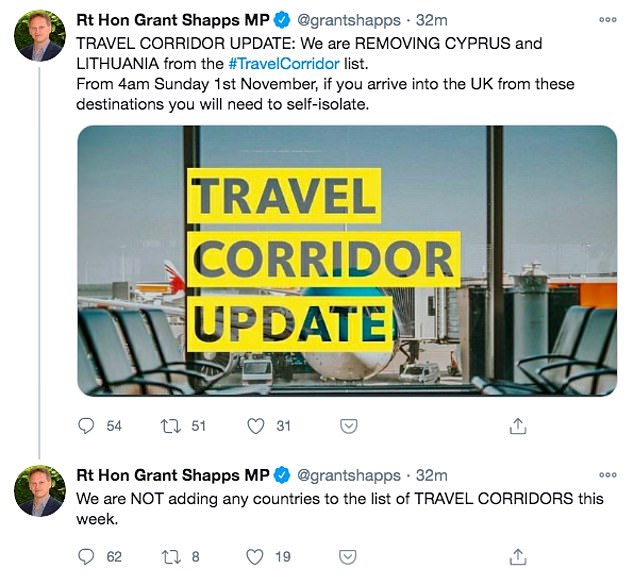 Transport Secretary Grant Shapps announced on Thursday that Cyprus and Lithuania would be taken off the UK Government’s list of travel corridors and that no new countries would be added to the list, which includes all the territories British travellers can visit without having to quarantine on returning to England

While some Brits expressed confusion, tweeting from Cyprus that they felt perfectly safe there, others were enraged by today’s announcement and questioned the logic of closing the travel corridor on the last day of the English half-term holiday, likely forcing many families to keep their kids at home for two weeks.

One Twitter user described taking Cyprus off the list as ‘madness’, sharing a photo taken on Wednesday night of a quiet-looking coastal view.

‘It felt safe, organised and everyone was following the rules,’ he said.

Another said there was ‘no risk’ in Cyprus, adding that people were tested on arrival as well as having to receive a negative test result before boarding a plane to leave.

‘Mask wearing in hotels is compulsory and even outside,’ he said. 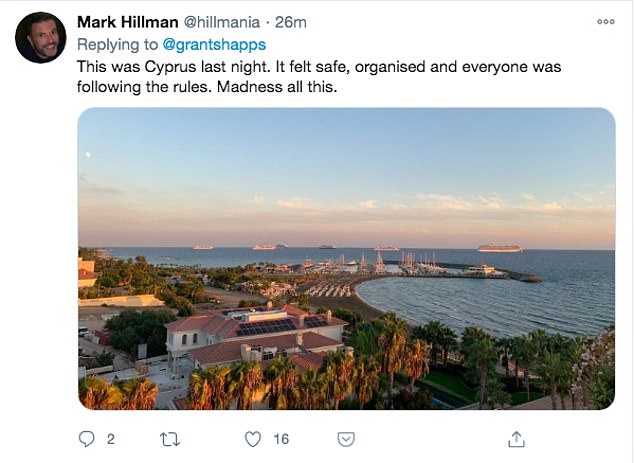 Many Twitter users questioned the wisdom of adding Cyprus to the list, pointing out that the island has much fewer cases than the UK

Many social media users couldn’t understand the Government’s decision to make the deadline for returning from Cyprus and Lithuania without having to quarantine Sunday, which is the last day of the English half-term holidays.

‘Can’t you just wait another 24 hours so we can get back on the flights we have already booked and get our children to school,’ one man asked on Twitter.

‘Seriously? Thousands of brits in Cyprus right now for half term, lots not flying back til Sunday evening, so now kids miss 2 more weeks of school,’ another posted, adding that they felt the Government had not ‘thought this one through’.

Twitter users expressed confusion and frustration at the Government’s decision to make the deadline for returning without having to quarantine 4am on Sunday, the last day of the English half-term holiday

The list of places which UK travellers can visit without facing 14 days in self-isolation continues to dwindle.

Liechtenstein was removed from the safe list last Sunday with Italy, San Marino and the Vatican City State being struck off the week before.

There are still 56 territories on the UK’s ‘green list’ where quarantine is not required on return, but many of the areas have their own restrictions on arrival or are closed to visitors completely.

Downing Street remains under intense pressure to change the UK’s travel quarantine rules amid growing fears for the future of the aviation and travel industries. 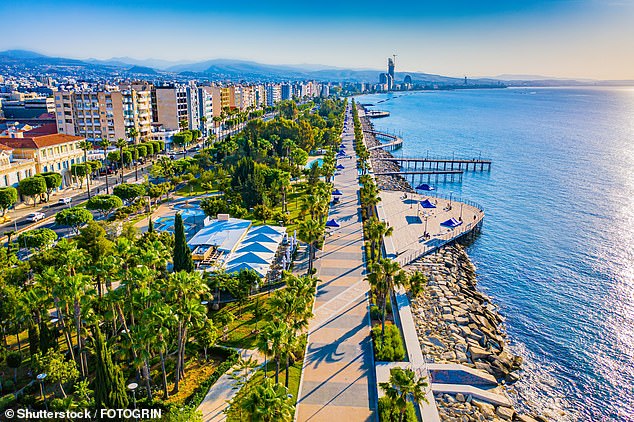 Cyprus recorded just 91 new coronavirus cases on Tuesday while Lithuania had 413. Both totals are considerably lower than the UK figures, which showed 22,885 new cases on Tuesday [File photo] 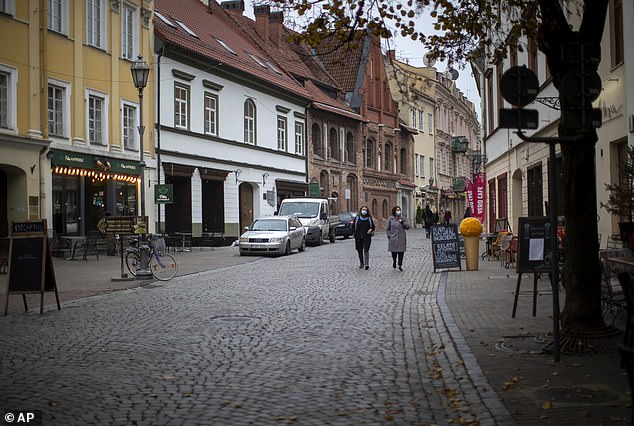 Lithuania has reported 150 deaths from coronavirus since the pandemic began at the start of this year. Cyprus has just 25 deaths, will 45,955 people in the UK have died from the virus

Ministers have faced calls for months to replace the current 14 day self-isolation restrictions for people returning to the UK from high risk countries with a more nuanced system of airport testing.

Advocates believe testing on arrival could open the door to significantly reducing the two week quarantine period to potentially less than seven days.

A double testing approach would see travellers tested on arrival and then told to self-isolate for something like five days when they would then be tested for a second time.

Two negative tests would be enough to allow people to end their period in quarantine and return to normal life.

However, ministers have been reluctant to approve airport testing because of concerns that the approach could fail to identify some people who have the virus.

This is because of the amount of time it can take for the virus to be detectable after the moment of infection.

Which places are still on the Government’s travel corridor list?

Britons travelling to any of the following places do not need to self isolate on returning to England as of 29/10/20:

Cyprus (will be removed from the list 4am, Sunday 1 November)

The Isle of Man

Lithuania (will be removed from the list 4am, Sunday 1 November)

St Vincent and the Grenadines

Global coronavirus cases soar by HALF A MILLION in ONE DAY

China’s vaccines may have ‘appeal’ in developing countries, economist says

‘This isn’t going to go away’: Dire warning on bushfires across Australia