WA: Anthony Grant Lauritsen, who tried to decapitate his GRANDMOTHER, could be released from jail

A man who attempted to decapitate his own grandmother and had a hit list of family members he wanted to kill may soon be released prison.

Anthony Grant Lauritsen used a lawn edger and hammer to murder and disembowel his grandmother Margaret Lauritsen, 67, and kill her poodle Susie in the Perth suburb of Calista in Western Australia in 1998.

He was found to have a hit list of people he wanted to murder, including his own family members, before he was sentenced to 20 years in prison.

Lauristen’s family are now ‘shocked’ that WA’s Prisoners Review Board recommended the murderer be released back into the community last week. 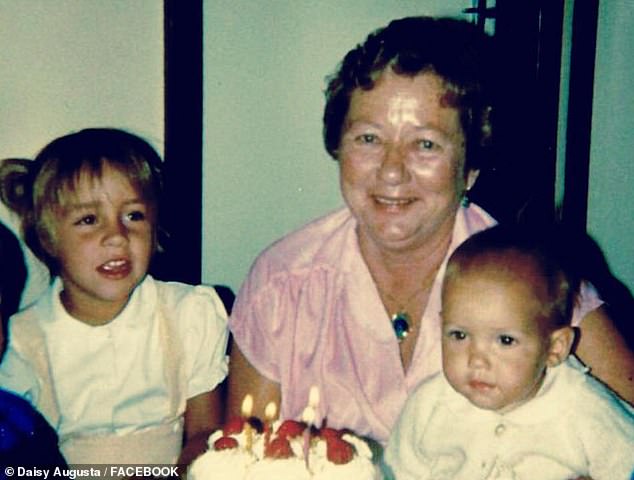 Margaret Lauritsen (pictured with her grandchildren), 67, was killed by her grandson Anthony Grant Lauritsen in Calista in Perth, WA in 1998

A family spokeswoman who was on Lauritsen’s hit list pleaded for the killer to be kept in jail for the safety of her family and the community.

‘Everyone is so shocked and scared that this could really be about to happen,’ she said, according to the West Australian.

‘If he is on anti-psychotic medication and stops taking them or starts taking drugs or drinking alcohol again, as free people can make the choice to do, … society won’t have the model prisoner that the parole board is seeing as actually wanting back in society but rather an unwell and unpredictable paranoid and violent man.’

The Lauritsen family received a letter from the Victim Notification Register last week.

According to the letter, the review board met on October 23 and ‘would report to the Attorney-General advising him that Mr Lauritsen is suitable for release to parole’. 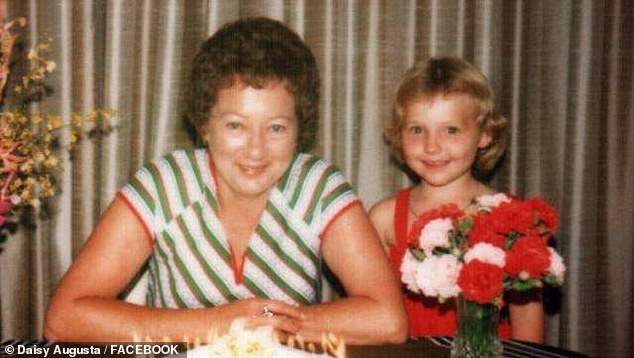 Margaret Lauritsen and her granddaughter. Anthony Lauritsen used a lawn edger and hammer to murder his grandmother. He also tried to decapitate her but was not able to

‘Please help keep the monster Anthony Lauritsen (my cousin) behind bars, we don’t want him in our community. Do you want him in your neighbourhood?’ Ms Farrell wrote.

‘This man brutally murdered my grandma, and they think he is now ready for release, what a joke! I want him in jail for the remainder of his life, he took the life of his own grandma, and I believe he should never be released.’

Ms Farrell said the ‘horrible crime’ has affected her family, particularly her father John, and ‘shattered our hearts’ as well as the Calista community.

‘Our family friends cleaned the house in the aftermath, it’s not a thing we as a family like to relive but unfortunately we have to,’ she said.

‘I just don’t want any other family to have to go through this ever it’s just totally horrible.

‘Conditions to parole in this case need to be addressed, as its not like he (Lauritsen) has any family support! So it’s unbelievable that he should even be able to be involved in the rehabilitation process, this is why we need to have our voice heard.’ 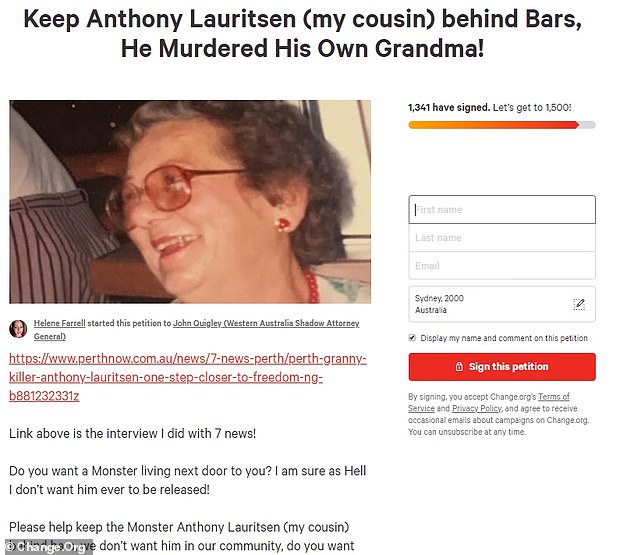 Attorney-General John Quigley will decide on Lauritsen’s release and approved him to join a re-socialisation program to prepare him for post-prison life last year.

Mr Quigley’s spokesman said he had not yet received Lauristen’s statutory report from the WA Prisoners Review Board. He said Mr Quigley can only decide on Lauristen’s release after reviewing the report.

After killing his grandmother in 1998, Lauristen rinsed the murder weapons and left them on his aunt’s bed, who he threatened to kill and tried to attack with an axe seven weeks prior.

Lauristen was waiting to kill his aunt once she returned when police found and arrested the blood-soaked murderer.

The judge noted Lauristen ‘attempted to sever her (his grandmother’s) head’ and ‘disemboweled her’ before ‘handling the contents, taking them out of the body’.

The court also heard Lauristen admired the Martin Bryant, who killed 35 people in the Port Arthur massacre in 1996.

Lauristen was sentenced to at least 20 years in jail, which was the longest sentenced ever handed down by a WA court at the time. 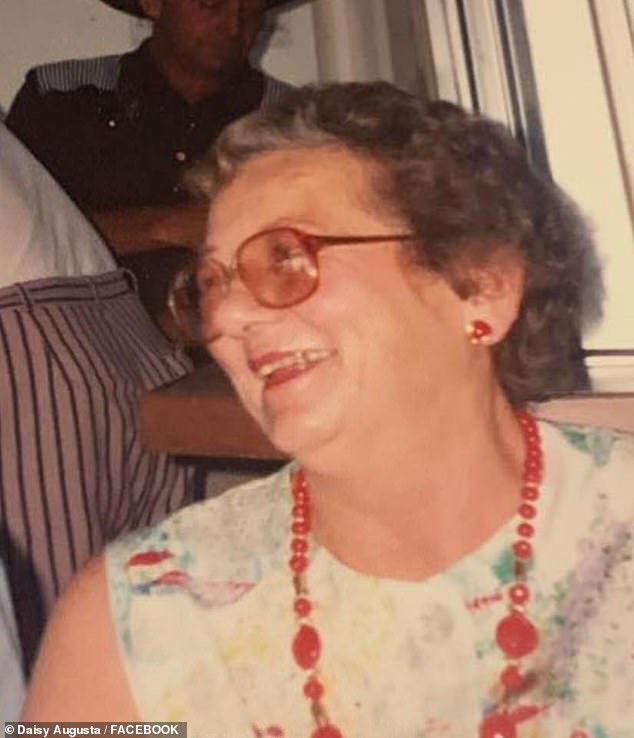 Margaret Lauritsen laughs at a family event. Her granddaughter Helene Farrell said: ‘This man brutally murdered my grandma, and they think he is now ready for release, what a joke!’