Which Presidents Have Been Impeached? 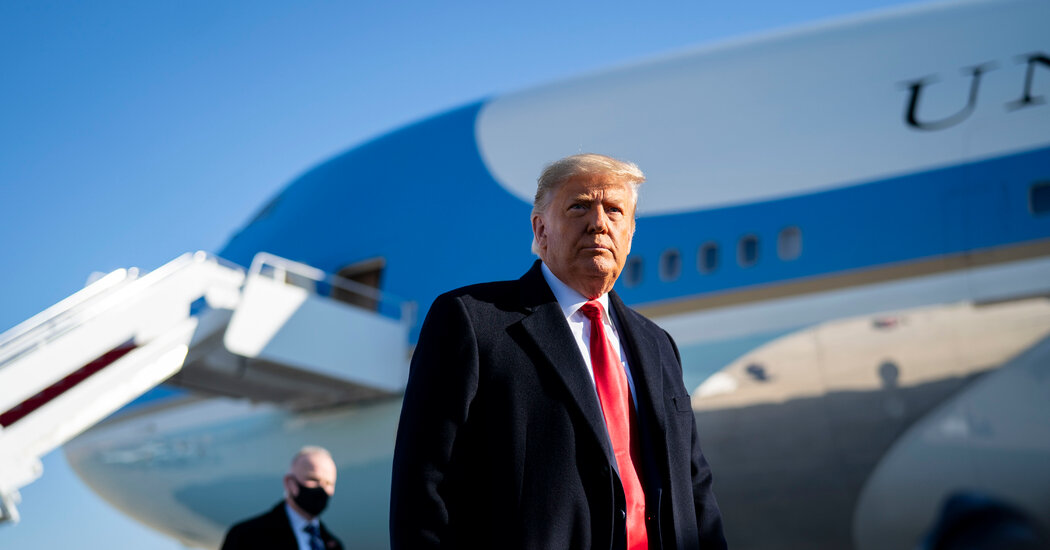 In the first two centuries of the United States government, the House of Representatives conducted only two presidential impeachment proceedings.

By the time the sun set on Wednesday, it had conducted three in just 25 years — with two of them in the past year and a half, against the first president ever to be impeached twice.

With a majority of the House voting on Wednesday afternoon to impeach President Trump on a charge of inciting an insurrection, just 13 months after the chamber impeached him on charges of abuse of power and obstruction of Congress, here is an overview of what happened the previous times.

In September 2019, Speaker Nancy Pelosi announced that the House would open an impeachment inquiry against Mr. Trump.

She took that step — one she had previously resisted — in response to a phone call in which Mr. Trump had pressured President Volodymyr Zelensky of Ukraine to investigate former Vice President Joseph R. Biden Jr., then a front-runner for the Democratic presidential nomination, and Mr. Biden’s son Hunter. The call came shortly after Mr. Trump had frozen nearly $400 million in aid to Ukraine.

The resulting charges stated that Mr. Trump had abused his power by using government aid as leverage to persuade Ukraine to help him electorally, and that he had obstructed Congress by refusing to provide documents and telling administration officials not to testify. The House impeached him on Dec. 18, 2019, voting 230 to 197 to approve the abuse of power charge and 229 to 198 to approve the obstruction charge.

On Feb. 5, 2020, the Senate acquitted Mr. Trump on both charges: 52 to 48 on abuse of power and 53 to 47 on obstruction of Congress. Senator Mitt Romney, Republican of Utah, joined Democrats in voting to remove him from office on the abuse of power charge, becoming the first senator ever to vote to convict a president of his own party.

The impeachment process against President Bill Clinton, a Democrat, began in October 1998 in response to the revelation that he’d had a sexual relationship with a White House intern.

The charges pertained not directly to his misconduct with the intern, Monica Lewinsky — who was 22, nearly three decades younger than Mr. Clinton, when it began — but to the allegation that Mr. Clinton had lied about it under oath and encouraged others to do the same.

“I did not have sexual relations with that woman,” Mr. Clinton said in January 1998, before admitting months later that he had. “I never told anybody to lie, not a single time. Never.”

On Dec. 19, 1998 — 21 years, almost to the day, before a Democratic-controlled House would vote to impeach Mr. Trump — the Republican-controlled House impeached Mr. Clinton on charges of perjury and obstruction of justice. The votes were 228 to 206 on the perjury charge (with five Democrats voting for impeachment and five Republicans voting against it) and 221 to 212 on the obstruction charge (with five Democrats voting for and 12 Republicans voting against).

The House voted against impeachment on a second perjury charge and on an abuse of power charge.

Congress never voted to impeach President Richard M. Nixon, a Republican, but only because he resigned before it could.

The impeachment proceedings stemmed broadly from the Watergate scandal, which started in 1972 when Nixon associates broke into the Democratic National Committee headquarters. That break-in was part of a huge, coordinated effort to influence the coming election, which Nixon ended up winning in one of the biggest landslides in American history.

The immediate catalyst for the House Judiciary Committee’s decision to begin the impeachment process, on Oct. 30, 1973, was the so-called Saturday Night Massacre 10 days earlier. That was the night Nixon, enraged by the Watergate investigation, ordered the firing of the special prosecutor, Archibald Cox. Two officials whom he ordered to fire Cox refused to do so and resigned; the third, Solicitor General Robert Bork, obeyed.

The committee ultimately approved three articles of impeachment — obstruction of justice, abuse of power and contempt of Congress — and referred them to the House floor in July 1974. The articles were approved in three separate votes, with the abuse of power charge garnering the most support: 28 to 10, with seven Republicans on the committee joining all 21 Democrats.

But before the full House could complete its hearings and vote on impeachment, Nixon announced his resignation on Aug. 8, 1974 — one day after Republican leaders in Congress told him that his support in his own party had crumbled, and that he would almost certainly be both impeached and convicted.

More than any president impeached after him, Andrew Johnson was impeached not really for a specific violation of law, but because of a broad power struggle between the White House and Congress.

Johnson — a Democrat and white supremacist who was Abraham Lincoln’s vice president and became president when Lincoln was assassinated — had spent much of his term clashing with the Republican-controlled Congress over Reconstruction. Among other things, he vetoed the Freedmen’s Bureau bill and the Civil Rights Act of 1866, which aimed to provide U.S. citizenship to former slaves; Congress subsequently overrode his veto of the Civil Rights Act.

In March 1868, the House approved 11 articles of impeachment against Johnson. The main charge was that he had violated the Tenure of Office Act of 1867, which Congress had enacted in an explicit effort to prevent him from firing pro-Reconstruction officials whom Lincoln had appointed. The act stated that the president needed Senate approval to fire Senate-confirmed executive officials, and Johnson defied it by firing Secretary of War Edwin M. Stanton.

In May 1868, Johnson came within a single vote of being removed from office. The Senate — then composed of 54 members, because there were only 27 states at the time — voted 35 to 19 in favor of conviction, but needed 36 votes for the required two-thirds majority.

He served out the remainder of his term, a little under a year.

Reaction and analysis after Trump impeachment

My lightbulb moment: Herbal beauty pioneer reveals the inspiration behind her business