Scientists remain divided over the effectiveness of masks in providing protection against the Covid-19 virus in the wake of Boris Johnson’s hints that he would soon make face coverings compulsory in shops in England.

Some senior researchers told the Observer that they strongly backed the decision as part of the government’s campaign to encourage people to get back to work. Others were less certain that it would be effective.

Trish Greenhalgh, professor of primary health care sciences at Oxford University, told the Observer that she thought the move was long overdue. “We are facing a massive public health emergency and unless we start wearing face coverings as a routine, thousands and thousands more people are going to die.

“And just look at the countries that have introduced face masks successfully,” she added. “Their death rates are tiny, while they are soaring in countries where people are not wearing face masks.”

However, epidemiologist Antonio Lazzarino at University College London said evidence to support the effectiveness of face coverings remained extremely weak. “My worry is that masks are a pretence to ease the lockdown to help the economy. However, this may well happen at the expense of people’s health,” he said.

“For example, we don’t know if keeping to 1 metre social distancing with masks is safer than 2 metres without. If masks make people get closer, they may be dangerous.”

Wearing masks is about protecting others, stressed Adam Finn, professor of paediatrics at Bristol University. “At least some transmission of the Covid-19 virus occurs when droplets generated by coughs and sneezes shoot across the space between you and someone else nearby. Wearing face coverings in crowded places will reduce the likelihood of that happening,” he said.

“However, most masks do a much less efficient job of protecting the wearer from breathing in droplets, and no mask will stop you infecting yourself with your hands. In fact, if you spend a lot of time touching and adjusting your mask and your hands are contaminated, they could even increase your risk of self-infection.”

Professor Susan Michie, director of the Centre for Behaviour Change at University College London, also backed moves to make face coverings compulsory in shops: “Masks need to be mandatory because that communicates that this is really important.” 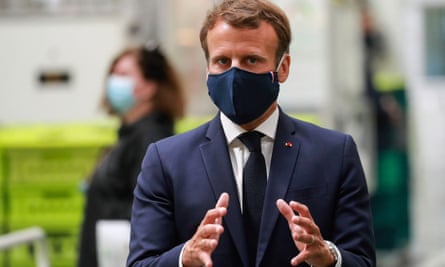 The French President Emmanuel Macron visiting a factory in May. Photograph: Ludovic Marin/EPA

However, Michie – who is also a member of Sage’s behavioural science advisory group – stressed that a public education campaign on masks also needed to be introduced and that it should be backed up by people in positions of influence – such as MPs.

“Sitting in the House of Commons with a lot of people from different households where 2 metres distancing isn’t always happening and where the ventilation is probably not good – is that a high-risk situation? Yes, it is. Therefore, they should be wearing face masks.”

Until last week, Boris Johnson had not been seen wearing a face mask in public, while his chancellor Rishi Sunak was criticised for not wearing one during a photo session where he served food in a restaurant in central London last week.

And one peer also said last week he had been told by a minister that he would be laughed at if he wore a mask in a parliamentary debate. Viscount Trenchard said that when he declared his intention to speak in the House of Lords while wearing a mask, “a noble friend who is a minister told me that I would expose myself to ridicule.”

Lord Trenchard told the Observer that he thought Britain had not fully accepted the wearing of masks as a normal thing to do. “If ministers were seen in public wearing masks it would send a good signal,” he added.

The need for a strong public health campaign to back the wearing of masks was also stressed by Professor Paul Hunter of the University of East Anglia. “People need to know what designs and materials of mask are appropriate, how to wear them properly, how long they should wear them for, and how they should either safely dispose of them or wash them ready for reuse,” he said.

However, if it is mandated to wear masks in shops, this raises the issue of whether they should be mandated in other contexts such as bars and pubs where the risk of transmission is probably going to be even higher than in stores, added Hunter. “The trouble is that face coverings cannot be safely used in establishments where people go to eat and drink,” he said. “The constant need to be always moving your face covering to take a sip of beer could be a risk.”

Professor Melinda Mills, director of Oxford University’s Leverhulme Centre for Demographic Science, said that although there might be initial reluctance to wear masks in public places in England, evidence suggested people got used to covering their faces. “Opinions change rapidly over face masks. In Italy uptake went from about 20% up to 84% over three weeks. And then it went up to 99%. It happens rapidly,” she said.

More than 120 countries now make wearing masks in public places compulsory, she added. “Scotland’s got it,” she said. “England is still exceptional.”

More Than $3.1 Million Of Counterfeit Watches Seized At O’Hare

Children whose parents have degrees feel more stressed at university