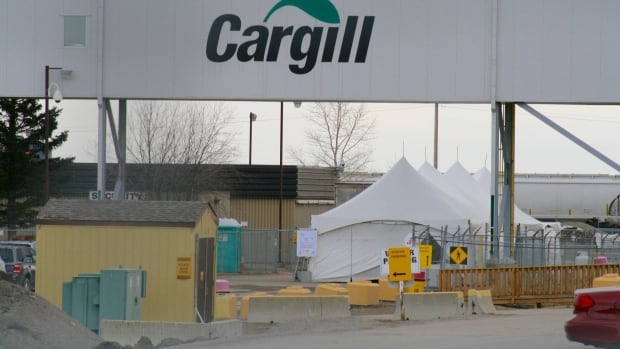 A worker has died and more than 484 people are sick amid an outbreak of COVID-19 linked to a meat-processing plant near High River, Alta.

The announcement that the Cargill plant south of Calgary will shut down temporarily came Monday, shortly before the latest numbers related to its outbreak, which is the largest in Alberta, were announced.

Employees at the facility have accused the company of ignoring physical distancing protocols and trying to lure them back to work from self-isolation.

The company said in a statement it was a difficult decision to close the facility.

“They are everyday heroes of the food system and each person continues to be a valued member of our team.”

Production is to stop once meat already in the plant is processed to avoid any food waste.

“We will process approximately three million meals currently in our facility as quickly as possible. We greatly appreciate our employees who are working to complete this effort,” he added.

It’s not clear how long the plant will be shut down, but the company did say workers would be paid according to their collective agreement.

The plant processes about 4,500 head of cattle per day — more than one-third of Canada’s beef-processing capacity.

Nash said Alberta Health Services has approved all the protocols Cargill put in place, beginning in the first week of March.

“We have taken proactive steps to focus on safety. We have encouraged employees not to come to work if they are sick, offering up to 80 hours of paid leave for COVID-related circumstances,” he said.

That runs counter to what several employees told CBC News about cramped conditions and working elbow to elbow. Some even said managers tried to encourage them to return to work even though they were isolating with symptoms.

On Monday, Alberta Chief Medical Officer of Health Dr. Deena Hinshaw confirmed a worker has died and said 484 cases are now linked to the plant, 360 of whom are Cargill workers. The remaining 124 cases are people who came into contact with those workers.

She said many of these cases were likely exposed to the coronavirus weeks ago, and more cases linked to the plant are expected to be confirmed in the coming days.

Hinshaw said some factors have been identified that contributed to the spread, such as employees continuing to carpool to work even after some safety measures were introduced at the plant.

Another factor was that some employees of continuing care centres where outbreaks have occurred live in large households with Cargill workers who have tested positive. Hinshaw said family members living in those households didn’t have adequate space to self-isolate.

“There seems to be several pieces to this puzzle … the challenge is, of course, to put all of those pieces together to get a full picture,” she said.

Lou Arab, with the Canadian Union of Public Employees in Alberta, said five employees at Seasons Retirement Communities in High River have tested positive for the coronavirus that causes COVID-19. Three of them are married to meat-packing workers.

“It’s going beyond the plant and it’s going into the community,” he said.

The president of the United Food and Commercial Workers union 401, which represents the Cargill employees, said the shutdown is better late than never. But he still has many questions.

“We still have grave concerns about their transparency. What are they saying to their workers … what does the future look like?” said Thomas Hesse.

Two other meat-packing plants in Alberta have seen workers test positive for COVID-19, and one of those plants is currently experiencing an outbreak.

In March, production was temporarily halted after one worker at Harmony Beef in Balzac tested positive, but Hinshaw said last week that the situation at that plant north of Calgary was under control.

On Monday, she said 67 workers at the JBS meat plant in Brooks have now tested positive, up from three cases last week.

Hygiene expert reveals how to turn bleach into a disinfectant

Jack Dorsey starts his day off with meditation, ice baths and sauna sessions