Dozens of customers have fallen victim to an elaborate scam in which fraudsters are selling fake Zimmermann products for hundreds or thousands of dollars.

The clothing items are so accurate that there is almost no way to tell the difference between a real and a fake, duping customers who have been shopping with the brand for more than 10 years.

Several customers claim they’ve been sold fakes at reputable retailers which are known wholesalers of the luxury Australian brand.

They say shopkeepers are likely selling genuine items to fraudsters, who then return a fake with the receipt. 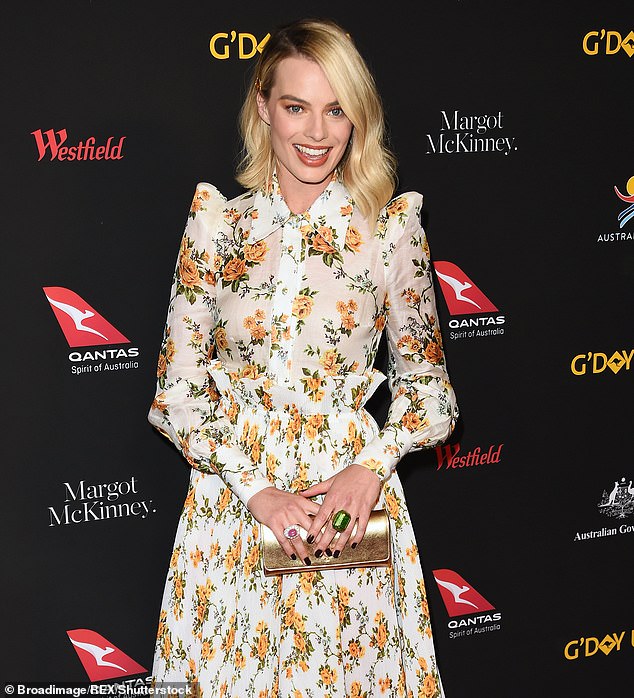 Dozens of customers have fallen victim to an elaborate scam in which fraudsters are selling fake Zimmermann products for hundreds or thousands of dollars. Pictured: Margot Robbie wearing Zimmermann 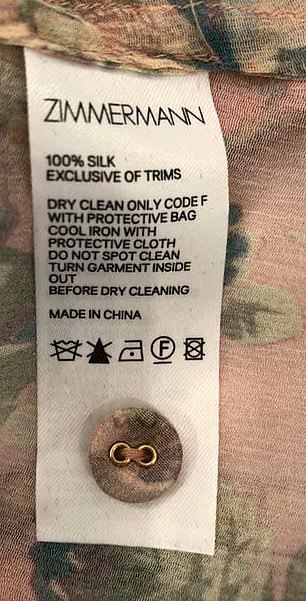 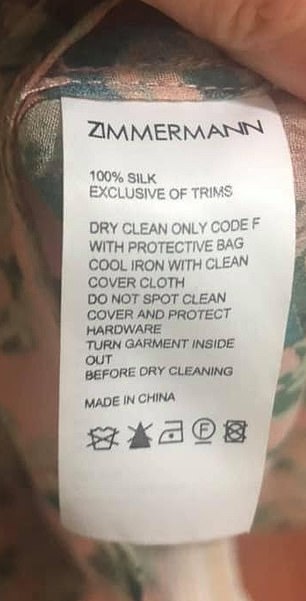 These two care tags were taken on two garments which are supposed to be the same. The left is real, includes a button and is without spelling errors, meanwhile the right does not include a button and the ‘Zimmermann’ label at the top is more spaced out than on the left

Because the employees are accepting the items and placing them back on shelves, other customers are then vulnerable to unwittingly purchasing something that is not of the same quality.

Others have purchased pieces from sellers with great ratings on Ebay or Facebook Marketplace.

‘The replicas are getting better and better and all of us need to be mindful when buying from someone else and not in store.’

Care labels stitched into the lining of the garment are usually the ‘best give away’ to judge a products authenticity.

With replicas, the stitching of the tag and its placement is usually slightly off, and the letters and font are rarely the same. 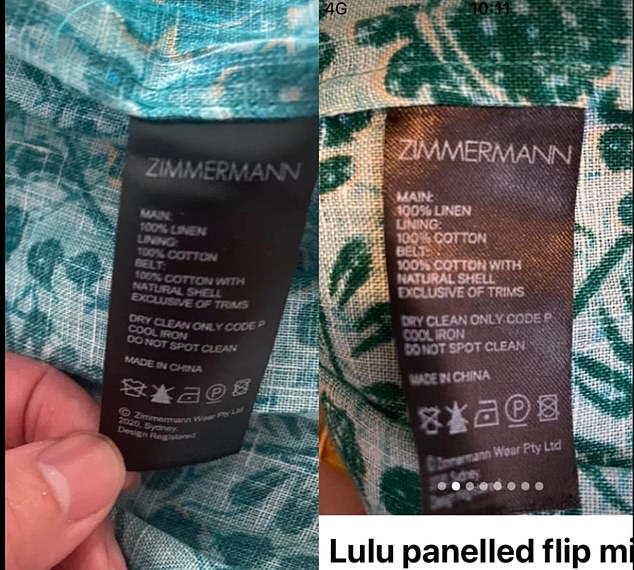 While some care labels have obvious spelling errors, others are so accurate that the stitching and a small triangle at the bottom of the tag are the only ways to spot a fake. The tag on the right is a fake, and is stitched on top of the seam rather than underneath it as is on the left 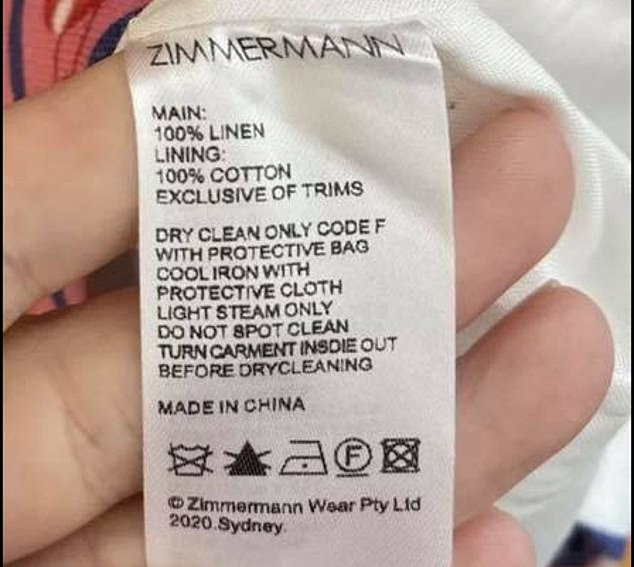 There have been several examples in recent weeks of customers realising they’ve purchased a fake once they receive the item and look closer at the tags.

Some women were forced to learn the hard way after telltale signs of a fake were posted online.

‘The ink isn’t as black and the print is faint. The actual material of the care label is also different,’ one Zimmermann aficionado explained.

In response, dozens of women shared pictures of care labels on their own products, with many coming to realise they’d been sold dupes.

One customer explained she was too scared to buy from anywhere other than Zimmermann stores anymore because even after 10 years of buying their clothes, she can no longer tell the difference between a real and fake. 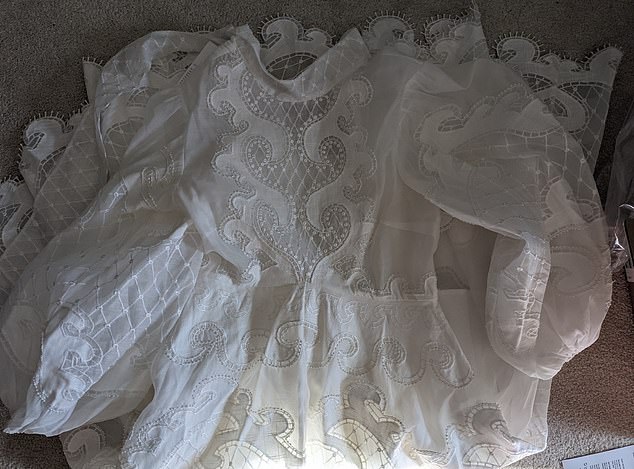 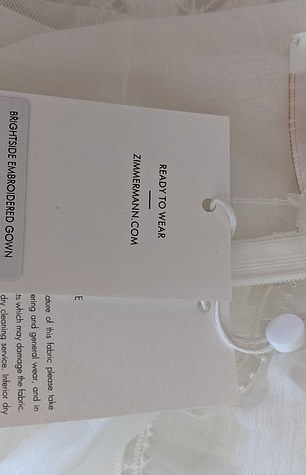 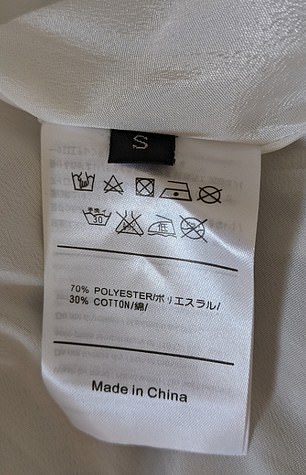 Other tags are simply nothing like the originals, and are considered less sophisticated dupes (right)

While some care labels have obvious spelling errors, others are so accurate that the stitching and a small triangle at the bottom of the tag are the only ways to spot a fake.

‘The triangle on a genuine Zimmermann is always isosceles,’ one customer with a keen eye for detail noted. ‘These fakes don’t have that.’

Other tags are simply nothing like the originals, and are considered less sophisticated dupes.

Customers have been urged to shop in store if possible to ensure they can examine any garments and care labels before purchasing.

If they do choose to shop online or from re-sellers, they are urged to ask for photos of both sides of the care label, and a proof of purchase.

The beloved Australian brand was founded in 1991 by sisters Nicky and Simone Zimmermann.

Nicky first started designing dresses and would sell them at Paddington markets before landing a two page editorial in Australian Vogue.

‘That was a significant moment because I suddenly started to receive orders from boutiques around Australia and I could feel some real momentum,’ Nicky previously explained.

In December 2020, it was revealed that the duo had sold an undisclosed stake of the business to Italian private equity fund Style Capital.

Globally, the brand already has 40 stores across Australia and the United States and Europe.

Daily Mail Australia has contacted Zimmermann for advice on how to avoid being scammed. 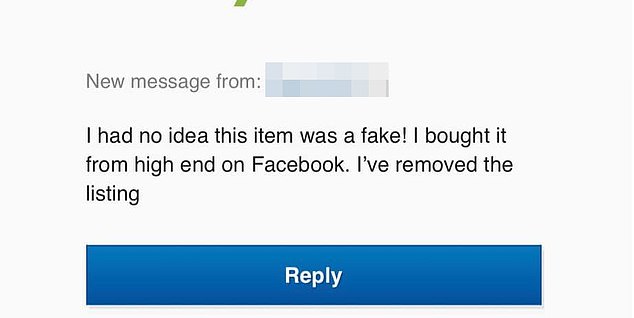 Inauguration Fashion: What Did It All Mean?

Dosunmu’s Return Powers No. 4 Illinois Over No. 7 Ohio State