by NewsColony20 January 2021
Share0
The newspaper reported the outgoing president had talked with aides and close friends about the idea.

The party would be named the Patriot Party.

Such a move would prove a major headache for the Republican Party, creating a split among conservatives in a country without preferential voting.

The Patriot Party would have the potential to pull away the Trump-supporting populist base of the Republican Party, which accounts for tens of millions of voters.

“I want you to know that the movement we started is only just beginning. There’s never been anything like it,” he said.

“The belief that a nation must serve its citizens will not dwindle but instead only grow stronger by the day.”

It comes as the Republicans in Congress distance themselves from the president in the wake of the January 6 Capitol riot.

Mitch McConnell, the leader of the Republican Party in the Senate, decried Mr Trump today over the riot.

“They were provoked by the President and other powerful people.”

While most members of the Republican House caucus opposed impeaching Mr Trump last week, ten representatives voted for it.

If Mr Trump were to start a new political party, it would give the Republicans in the Senate extra incentive to convict him in the impeachment trial.

If a president is convicted after an impeachment, senators can vote to prevent them from ever running for office again.

The Senate’s top Democrat Chuck Schumer is already pushing for a permanent ban.

“We need to set a precedent that the severest offence ever committed by a President will be met by the severest remedy provided by the Constitution — Impeachment and conviction by this chamber as well as disbarment from future office,” Mr Schumer said.

A party switch would be nothing new for Mr Trump, who has changed his political registration numerous times.

Mr Trump first registered to vote in 1987 as a Republican, before joining the Independence Party in 1999.

In 1999 he briefly ran for president for the Reform Party, pledging support for a single-payer government run health care plan.

He became a Democrat in 2001, then changed back to the Republican Party in 2009.

In 2011 he became an independent, then rejoined the Republican Party a year later.

The creation of a new political party would suggest Mr Trump is looking to run for president again in 2024.

It also raises questions as to his children’s political ambitions. His daughter Ivanka, son Donald Jr and daughter-in-law Lara have all been linked to bids for office themselves. 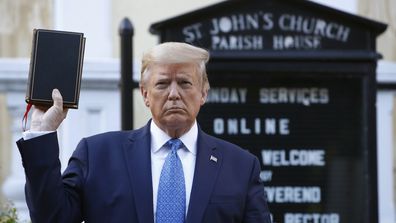 The Donald Trump presidency in pictures

It is not apparent whether they would run as Republicans or for the new party.

The last president to be elected from neither the Democratic nor Republican Party was Zachary Taylor in 1848.

President Taylor was a member of the Whig Party, which was dissolved in 1856 when their voter base shifted to the newly created Republican Party.

Chase Chrisley Tells Us Why You’ll Burn for His Candles